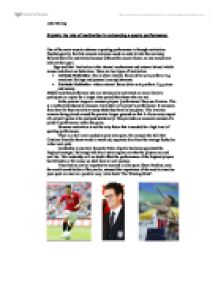 Explain the role of motivation in enhancing a sports performance One of the main ways to enhance a sporting performance is through motivation. Psychologically, the first element everyone needs in order to take the next step forward has to be motivation because without this crucial factor, no one would ever achieve their goal. Sage said that 'motivation is the internal mechanisms and external stimuli which arouse and direct our behaviour. There are two types of motivation. * Intrinsic Motivation- this is where internal forces drive us to perform. E.g. emotional feelings and personal accomplishments. * Extrinsic Motivation- where external forces drive us to perform. E.g. prizes and money. Biddell said that performers who are intrinsically motivated are more likely to participate in a sport for a longer time period than those who are not. In the premier league to measure players 'performance' they use Prozone. This is a method introduced to measure every detail of a player's performance. It measures from how far they run to how many shots they have in one game. This involves cameras being placed around the premier league grounds so that it allows every aspect of a player's game to be analysed statistically. This provides an accurate account of a player's performance within the game. ...read more.

Sports psychologists seen him to be a victim of his failure to control his arousal levels. In team sports such as rugby the coach and the captain are responsible for the team's motivation. It is ok in them making sure the team has a high level of motivation for the game but they cannot control a player's decision making and information processing. They can still lose a game by a player making the wrong decision regardless of how motivated the individual is. In the Wales vs Italy match in 2006 the welsh fly half Stephen Jones decided to kick for touch in the closing stages instead of going for the try. As the ball went into touch the referee blew for full time so the chance to win was lost. The decision making of Stephan Jones cost his country a vital win in the six nations. The English world cup winning mastermind Sir Clive Woodward said that he told his players they needed their 'heart in the fire and their head in the fridge.' This meant they needed to play with controlled aggression and have the ability to make tactical decisions at crucial times. Racket sports such as tennis require hard physical work but there is a need for a clear head to make choices mid rally. ...read more.

A triathlete would set out to beat their previous time and to push their body even further to the limit. A triathlon is one of the most gruelling fitness tests known to man and only the most physically and mentally tough of humans, can be motivated enough to complete the event. An individual's skill level will depend on how they should be motivated. A professional footballer such as Ryan Giggs may need to be negatively reinforced sometimes. This would involve a ranting and raving session from Sir Alex Ferguson saying something along the lines of 'you must improve or your coming off.' On the other hand a beginner should be motivated through positive reinforcement. The coach should concentrate on the good things they do and not put the skill under too much pressure as this may discourage the player. Using praise such as ' well done, keep it up, your doing well.' Motivation in sport is detrimental to enhancing sports performance. The right blend in the right way is key to success. If the arousal levels are correct for the sport this will most definitely improve a sporting performance. The famous American Football coach Vince Lombardi once said ' Leaders aren't born, they're made. And they are made just like anything else, through hard work, determination and motivation. ...read more.