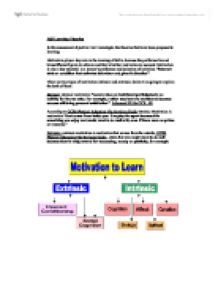 Motivation plays a key role in the learning of skills, because the performer has set himself/herself goals to achieve and that is his/her motivation to succeed. Motivation is also a key essential in a learners preference and selection of activities.

A03 Learning Theories In this assessment objective I will investigate the theories that have been proposed to learning. Motivation plays a key role in the learning of skills, because the performer has set himself/herself goals to achieve and that is his/her motivation to succeed. Motivation is also a key essential in a learner's preference and selection of activities. "internal state or condition that activates behaviour and gives it direction" There are two types of motivation intrinsic and extrinsic, below I am going to explain the both of them: Intrinsic: intrinsic motivation "occurs when an individual participates in an activity for its own sake. For example, a skier may learn to snowboard because success will bring personal satisfaction" Advanced PE for OCR AS According to GCSE Physical Education The Revision Guide Intrinsic Motivation is motivation "that comes from inside you. You play the sport because it is something you enjoy and would want to do well at it, even if there were no prizes or rewards." Extrinsic: extrinsic motivation is motivation that comes from the outside. GCSE Physical Education The Revision Guide states that you might want to do well because there's a big reward for succeeding, money or publicity, for example ???????????? ...read more.

Necessary conditions for effective modelling: 1. Attention - various factors increase or decrease the amount of attention paid. Includes distinctiveness, affective valence, prevalence, complexity, functional value. One's characteristics (e.g. sensory capacities, arousal level, perceptual set, past reinforcement) affect attention. 2. Retention - remembering what you paid attention to. Includes symbolic coding, mental images, cognitive organization, symbolic rehearsal, motor rehearsal 3. Reproduction - reproducing the image. Including physical capabilities, and self-observation of reproduction. 4. Motivation - having a good reason to imitate. Includes motives such as� past (i.e. traditional behaviourism), promised (imagined incentives) and vicarious (seeing and recalling the reinforced model) Bandura believed in "reciprocal determinism", that is, the world and a person's behaviour cause each other, while behaviourism essentially states that one's environment causes one's behaviour, Bandura, who was studying adolescent aggression, found this too simplistic, and so in addition he suggested that behaviour causes environment as well. Later, Bandura soon considered personality as an interaction between three components: the environment, behaviour, and one's psychological processes (one's ability to entertain images in minds and language). "Social learning theory has sometimes been called a bridge between behaviourist and cognitive learning theories because it encompasses attention, memory, and motivation. The theory is related to Vygotsky's Social Development Theory and Lave's Situated Learning, which also emphasize the importance of social learning." http://www.learning-theories.com/social-learning-theory-bandura.html ...read more.