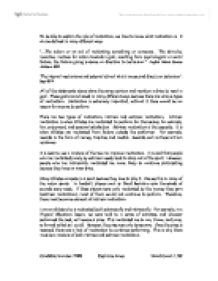 To be able to explain the role of motivation, we have to know what motivation is.

To be able to explain the role of motivation, we have to know what motivation is. It can be defined in many different ways. "...The action or an act of motivating something or someone. The stimulus, incentive, motives for action towards a goal, resulting from psychological or social factors; the factors giving purpose or direction to behaviour." English Oxford Shorter Addition 1993 'The internal mechanisms and external stimuli which arouse and direct our behaviour'. Sage 1974 All of the statements above share the same opinion and mention a drive to reach a goal. These goals are achieved in many different ways because there are various types of motivation. Motivation is extremely important, without it there would be no reason for anyone to perform. There are two types of motivation, intrinsic and extrinsic motivation. Intrinsic motivation is when athletes are motivated to perform for themselves, for example, fun, enjoyment, and personal satisfaction. Extrinsic motivation is the opposite. It is when athletes are motivated from factors outside the performer. For example, rewards in the form of money, trophies, and medals. ...read more.

Likewise, positive feedback has its advantages and disadvantages. Positive feedback can motivate a performer because if they know they are performing effectively, it would encourage them to progress. However, too much positive feedback can boost the performer's ego so much that there is less motivation for them to continue training. Therefore, if they do not come to training, their performance would decrease. Through playing sport I have become aware of both positive and negative feedback. For example, at a football match I played, I was praised for my overall game. However, I was told that when I crossed the ball, it was not always accurate. This has encouraged me to go to training sessions, to improve on my skills as a footballer. In conclusion, motivation is a very powerful tool and if used correctly, it can enhance a performance. Motivation influences the decisions we make, our learning, the performance in the sport. Generally, people who are highly motivated are more likely to learn and practise skills than those who are not. It is important to have the right balance of the different types of motivation to enhance a sports performance. A slight increase or decrease of one can drastically affect the athlete's performance. ...read more.