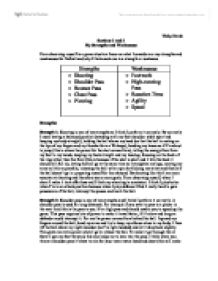 Netball - My Strengths and Weaknesses

Vicky Davis Sections 2 and 3 My Strengths and Weaknesses From observing myself in a game situation these are what I consider are my strengths and weaknesses for Netball and why I think each one is a strength or weakness. Strengths Weaknesses ? Shooting ? Shoulder Pass ? Bounce Pass ? Chest Pass ? Pivoting ? Footwork ? High-running Pass ? Reaction Time ? Agility ? Speed Strengths: Strength 1: Shooting is one of my strengths as I think I perform it correctly. By correctly I mean having a balanced position (standing with my feet shoulder width apart and keeping my body straight), holding the ball above my head (so that the ball is resting on the tips of my fingers and my thumbs form a W shape), bending my knees as if I'm about to jump (this is where the power for the shot comes from), letting the energy flow from my feet to my hands, keeping my back straight and my head up, focusing on the back of the ring rather than the front (this is because if the shot is short and it hits the back it should still fall in), letting the ball go at the same time as I straighten my legs, moving my arms as little as possible, releasing the ball with a spin by flicking my wrists and finally if the ball doesn't go in preparing myself for the rebound. ...read more.

The reason for performing the wrong footwork could be because I'm off balance when I receive the ball or I could not be co-coordinated. For correct footwork, having received the ball, I can land or stand on one foot whilst the foot I landed on remains grounded, my second foot can be moved anywhere any number of times and I can also pivot on my landing foot if I want to. Once my landing foot is lifted, it must not be re-grounded until the ball is released. Weakness 2: The high-running pass is definitely one of my weaknesses as I find it really hard to understand and perform. I think I don't react fast enough, I am sometimes not in the right position, and I anticipate for too long and am not fast enough on my feet. A high-running pass is used when a player is trying to get the ball into an attacking position quickly. The ball is caught while a player is in mid-run and then released by jumping into the air. You have to run towards the ball with both hands open ready to catch it. When you have caught the ball you don't stop moving. You have to remember which of your feet hit the ground first as this is your landing foot. You then step forward with your other foot (the larger the step the better) ...read more.

Practice one is where there are two people standing back to back in the middle of two lines and a third person standing behind one of those lines. The third person shouts go whenever they feel like it and both people will have to run to each line that they are facing. The fastest person to react will get to their line first. Practice two is where two people face each other and one of them has the ball. One person has to have their back to a wall. When the person with the ball throws the ball against the wall the person without the ball has to turn around quickly to receive the ball once it has rebounded off the wall and catch it. The more practice the person has the quicker the person will react and to catch the ball. Practice 3 is kind of similar to the previous one. One person faces the wall and the other person stands behind them with the ball (about a metre behind). The feeder throws the ball against the wall and the receiver has to catch it quickly. Weakness 5: Speed can be improved by doing shuttle runs. Shuttle runs are where you run a short distance for a certain period of time. So for netball a person will run from the back line of the court to the end of the first third and back again for a number of times and then will increase the amount of times they run per session to progress their speed. ...read more.