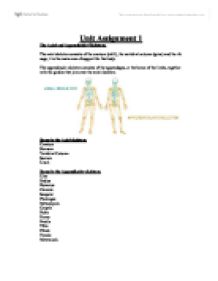 The Axial and Appendicular Skeletons.

Unit Assignment 1 The Axial and Appendicular Skeletons. The axial skeleton consists of the cranium (skill), the vertebral column (spine) and the rib cage; it is the main area of support for the body. The appendicular skeleton consists of the appendages, or the bones of the limbs, together with the girdles that join onto the axial skeleton. Bones in the Axial skeleton: Cranium Sternum Vertebral Column Sacrum Llium Bones in the Appendicular skeleton: Ulna Radius Humerus Clavicle Scapular Phalanges Metacarpals Carpals Pubis Femur Patella Tibia Fibula Tarsals Metatarsals These bones can be put into four bone type groups, there is flat, long, short, irregular and Sesamoid. Long Bones Long bones are cylindrical in shape, and are found in the limbs of the body, examples of long bones are; Femur Tibia Humerus Phalanges (although not great in length, these possess the cylindrical shape and so also are long bones) Long bones primary functions are to act as levers; therefore they are essential in movement, i.e. when running, the psoas, iliacus and rectus femoris muscles pull on the femur to cause flexion of the hip, effectively pulling the leg off the ground. The rest of the quadriceps group (the vasti muscles as well as the rectus femoris) then pull on the tibia causing extension to take place at the knee joint, enabling the lower leg to 'snap' through. ...read more.

Strong ligaments exist in order to prevent any sideways movement. The Pivot joint - this is also uniaxial, which allows rotation only. For example; the cervical vertebrae where the axis rotates on the atlas. The Ellipsoid joint - this joint is biaxial, allowing movement in two planes. For example; the radio-carpal join of the wrist allows back and forth as well as side to side movement. The Gliding join - this is formed where flat surfaces glide past one another; although mainly biaxial they may permit movement in all directions. For example; in the wrist, where the small carpal bones move against each other. The Saddle joint - this is biaxial and generally occurs where concave and convex surfaces meet. For example: the carpo-metacarpal joint of the thumb. The Ball and Socket joint - this allows the widest range of movement and occurs where a rounded head of a bone fits into a cup-shaped cavity. For example: in the hip and shoulder. Movement patterns occurring in synovial joints Flexion Extension Abduction Adduction Circumduction Rotation Pronation Supination Plantarflextion Dorsiflextion Inversion Eversion Definitions Flexion - this occurs when the angle between the articulating bones is decreased, flexion occurs in the median plane about the horizontal axis. A muscle that causes flexion is known as a flexor. Example: by raising the lower arm up to touch the shoulder, the angle between the radius and the humerus at the elbow has decreased, flexion of the elbow has occurred. ...read more.

Pivot joint is found in the distal joints of the phalanges. Ellipsoid joint is found in the metacarpophalangeal joint of the fingers. Gliding joint is found between the clavicle and the sternum. Saddle joint is found in the carpometacarpal joint of the thumb. Ball and socket joint found in the hip. In this picture the player is being lifted by two lifters in a rugby lineout, the rugby players are using many bones in this movement, and many movement types, they are using flexion and extension in the whole move of the life, as they go from a low crocheted flexed position, up into a tall extension, and so does the player being lifted, as they extend as high as possible to reach the ball in the air and gain and advantage over the opposite team. In this photo the player has kicked a ball, he use's many joints to do this, there is the gliding joint in the wrist, the pivot joint in the neck, the ball and socket joint in the hip, the saddle joint in the fingers, and the hinge joint in the knee. The hip and the knee are allowing most of the movement in this kick, by using flexion and extension in the run up, and then full extension in the arms and the legs for the kick, which puts a lot of strain on the knee, but by its detailed joint type, it is able to take the strain of kicking without causing damage. ...read more.