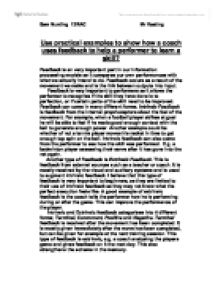 Use practical examples to show how a coach uses feedback to help a performer to learn a skill?

Use practical examples to show how a coach uses feedback to help a performer to learn a skill? Feedback is an very important part in our information processing models as it compares our own performances with what we actually intend to do. Feedback occurs as a result of the movement we make and is the link between outputs into input. Feedback is very important to performers as it allows the performer to recognise if the skill they have done is to perfection, or if certain parts of the skill need to be improved. Feedback can come in many different forms; Intrinsic Feedback is feedback from the internal proprioceptors about the feel of the movement. For example, when a football player strikes at goal he will be able to feel if he made good enough contact with the ball to generate enough power. Another example could be whether of not a tennis player moves his racket in time to get enough top spin on the ball. Intrinsic feedback can also come from the performer to see how the skill was performed. ...read more.

Concurrent Feedback is either intrinsic feedback received during the movement, usually from the proprioceptors and kinaesthesis, for example a batsman finding the middle of the bat. This type of feedback can also be extrinsic, for example a swimmer might be getting told to keep their arms closer to their ears as they follow through by a coach when performing backstroke. Positive Feedback is obviously when a skill is performed correctly giving a successful outcome and a positive feedback. The player then knows what to repeat for the next time that they do that particular action. This can get them aroused and the player is then more motivated. This type of feedback is essential for beginners. An example of this would be if a basketball player performs a good jump shot and the coach tells them that it had good technique. It can either be intrinsic of extrinsic. Negative feedback is more than just picking out a weakness in the players game. It includes what the player should do to correct the fault. This feedback must be used carefully because it can easily de-motivate the player, to a player who is well developed in their sport this type of feedback is vital to tune their techniques, e.g. ...read more.

This feedback is essential in skill learning, especially in the early stages. Knowledge of results can be both positive and negative and is being important in improving the next performance of the movement. Knowledge of performance concerns the actual movement itself and the quality of it. It is normally from an external source but can be internally from the kinaesthetic awareness. A coach or teacher may talk to the performer and give them information about their success and why they were successful, as well as improvements. All of the different types of feedback are examples of how a coach can give information back to the performer. However, there are factors which a coach might have to consider determining which type of feedback he will have to use. For instance if the performer is a beginner, the coach could use positive feedback so that if they do the skill correctly they will remember the correct feelings of how to do the skill. If the performer was in a race then the coach would give terminal feedback after the race had finished otherwise it would be very unlikely that the performer will be taking in other information from his surroundings whilst in the race. ?? ?? ?? ?? Sam Nurding 12RAC Mr Keating ...read more.