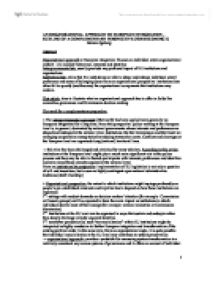 An Organisational Approach To European Integration &amp;#150; Outline of a Complementary Perspective.

AN ORGANISATIONAL APPROACH TO EUROPEAN INTEGRATION - OUTLINE OF A COMPLEMENTARY PERSPECTIVE (FORTHCOMING 1) Morten Egeberg Abstract Organisational approach to European integration: focuses on individual actors organisational context � to account: behaviour, interests and identities Intergovernmentalists: usually preclude any profound impact of EU institutions and organisations Institutionalists: claim that EU institutions are able to shape and reshape individual actors' preference and sense of belonging (seen from an organisational perspective: institutionalists often fail to specify (and theorise) the organisational components that institutions may contain. This article: tries to illustrate what an organisational approach has to offer in fields like committee governance and Commission decision making. The need for a complementary perspective: O The intergovernmental argument (Moravscik) has been applied more generally on European integration for a long time. From this perspective: policy-making at the European level is, in general, dominated by national governments whose interests and preferences are shaped and reshaped at the national level. Institutions like the Commission and the Court are managing cooperation among states by reducing transaction costs. Conflicts and cleavages at the European level are organised along (national) territorial lines. � this view has been challenged and criticized by many scholars. According to this critics: institutions at the European level might play a much more significant role in the policy process and they may be able to furnish participants with interests, preferences and identities and even recast those already acquired at the national level. ...read more.

Organisation = main employer. Secondary structure: usually engage people only on a part-time basis O Organisational demography According to Pfeffer demography refers to the composition, in terms of basic such as age, sex, nationality, education and length of service of the social entity under study � such factors are supposed to impact on decision behaviour (although the strength of potential effects have to depend on characteristics of the organisational structure). Impacts of demographic factors are closely related to socialisation. Socialisation usually means that values, norms and role expectations have become internalised in individuals. New recruits: arrive "pre-packed" with images and attitudes � with increasing length of service in a particular organisation they may however become resocialised. Socialised organisational members identify themselves strongly with a particular organisation and are supposed to advocate its interests "automatically" in the sense that these interests are taken for granted and legitimate without further consideration. O Organisational locus (has not been emphasized very much in the literature) Most organisations are located in particular places and buildings 1st: features of location and physical space segregate private lives and their associated role conceptions and identities from organisational roles and identities 2nd: when multiple organisational memberships are separated in space: cues are evoking different roles and identities 3rd: physical distance within and between government buildings seems to affect contact patterns and co-ordination behaviour. ...read more.

Result: might be that sectoral and functional identities could be evoked simultaneously, although not to the same extent. Commission: divides it work primarily according to sector or function, clearly expressed in the existence of directorates general (DGs). At all levels (including preparatory expert committees) participants are not, as a main rule, expected to represent their country of origin. Neither this organisational setting is however unambiguous. (Commission may be interested in having the views of the Member States presented in order to anticipate more precisely future Council reactions. However role perceptions in Commission committees do differ from those assumed in Council groups. In the latter the government representative role is clearly more prevalent). The Commission and its personnel The role that national interests might play in Commission decision-making is a highly contentious and enduring issue. It has been stated however that even the Commission is permeated by national interests and acts as an important competition between them Most intergovernmentalists would probably tend to see commissioners, their cabinet members, as well as officials in the services, as actors mainly pursuing the interests of their respective national governments. Institutionalists: would most likely emphasise that the Commission like the other institutions furnish individual actors with particular interests and beliefs and that it may even be able to resocialize people so that they gradually come to assume supranational identities. ...read more.