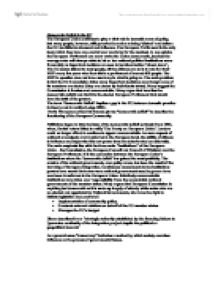 Democratic Deficit in the EU.

Democratic Deficit in the EU The European Union continues to play a vital role in domestic areas of policy, but many people, however, still perceive the union as being 'distant' and believe the EU has little involvement and influence. The European Parliament is the only body which they have any control over and is by far the weakest. In my opinion the European Parliament can never make the Union democractic, because the average voter will always relate to his or her national political institutions more favourably as important decisions are seen to be taken behind 'closed doors'. The EU seems distant to most people, all the citizens can do is to vote for their MEP every few years who then sits in a parliament of around 600 people. The MEP in question does not have much say in what is going on. The main problem is that the EU Commission takes many important decisions even though none of its members are elected (they are chosen by individuals states). ...read more.

* Conducts external relations on behalf of the EU member states. * Manages the EU's budget. Dinan describes it as a "strategic authority established by the founding fathers to 'guarantee continuity of the integration project despite the political or geopolitical hazards' In a general sense "democracy" indicates a method by which society exercises influence on the process of governmental issues. According to Craig (2003) different features can be distinguished concerning the democracy argument: * 'distance issue': The assumption commonly made is that if the EU did not exist then matters within its capabilities would be dealt with at national level. Decesions would them be made closer to people hence alleviating this problem and parliaments would have greater control. * 'executive dominance issue': The integration process enhances the power of the (Council and Commission). This is because of the dominance of the Council as well as the European Council in the decision-making process of the EC. ...read more.

All of which must work together and be properly equipped and funded to do their jobs. The EU defines the rule of law as a constitutional system whereby the different organs of the state are aligned and limited in such a way that the state cannot illegally infringe on a citizen's rights. In this area EU law itself provides no specific parameters for the necessary reforms; in other words, with regard to the rule of law, acquis communautaire does not exist. www.cilc.nl/focus SUBSIDIARY The general description of the term subsidiary is not about transferring powers from central to national, regional and local level according to the Commission. Many suggest that the term is used by those who want to believe that the Commission is interested in giving powers to lower levels of decision making, although proposals show that this is not the case. The principle of subsidiary is described as a "non-starter" for distribution of powers between EU-level and national level. There are no proposals for how the principle could be put into practice, except the possibility of introducing "control procedures" to ensure compliance with the principles of "subsidiarity". ...read more.