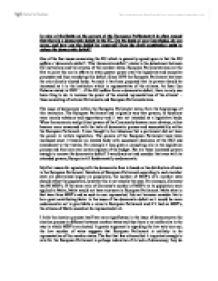 In view of the limits on the powers of the European Parliament it isoften argued that there is a democratic deficit in the EU. On the basis of yourknowledge, do you agree, and how can the deficit be removed? Does the draftconstitution assist to redu...