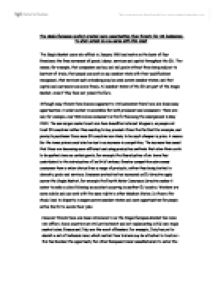 The single European market created more opportunities than threats for UK businesses. To what extent do you agree with this view? The Single Market came into effect in January 1993 and works on the basis of four freedoms, the free movement of goods, labour, services and capital throughout the EU. This means, for example, that companies can buy and sell goods without them being subject to barriers of trade, that people can work in any member state with their qualifications recognized, that services such as banking may be used across member states, and that capital and currencies can move freely. All member states of the EU are part of the Single Market, even if they have not joined the Euro. ...read more.

A reason for the lower prices could also be due to an increase in competition. The increase has meant that firms are becoming more efficient and using production methods that allow their costs to be pushed down on certain goods, for example the liberalization of air travel has contributed to the introduction of 'no frills' airlines. Greater competition also means consumers have a wider choice from a range of products, rather than being limited to domestic goods and services. Consumer protection has increased as EU directive apply across the Single Market, for example the Fourth Motor Insurance Directive makes it easier to make a claim following an accident occurring in another EU country. ...read more.

There are fears of possible cultural differences. For example, if Muslim states join would they be able to adjust their approach to women to meet the standards set by the EU? Should they have to? The opportunities that exist for criminal elements to exploit the single market could cause de-stabilising effects. The disparity between member states could lead to further social and economic problems, particularly in countries that used to be part of the former Soviet bloc where it is acknowledged that they are a long way behind the economic development of existing members. The experience faced by Germany when it united West Germany with the former 'communist' East Germany is a good example of the potential problems that could arise. ...read more.