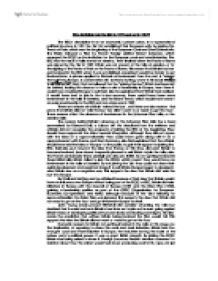 Why did Britain join the EEC in 1973 and not in 1957? The EEC's description is as an economic customs union, in a supranational political structure. In 1951 the 'Six' first established their European unity by signing the Treaty of Paris, which was the beginning of the European Coal and Steel Community. The ECSC followed a Plan by French Foreign Minister Robert Schumen, which arranged the ECSC as the institution for the European coal and steel industries. The EEC was the result of talks started at Messina, then finalised when the Treaty of Rome was signed by the 'Six' in 1957. Britain was not present at the talks at Messina, or for the signing of the Treaty of Paris or the Treaty of Rome. This meant that Britain had not got involved in the EEC when it was established, meaning it would be harder to get involved later. A phrase applied to this lack of involvement from the start, is "missed the bus" into Europe. A conservative MP, Anthony Nutting, wrote in his book Europe Will Not Wait (1964) that he believed that by "missing the bus" Britain had been left far behind, loosing the chance to take a role of leadership in Europe, from there it could have moulded Europe to suit itself. Also he explained that if Britain had realised it would have had to join in the future anyway, there could have been more involvement in the talks in Messina, and the Rome Treaty, which would have meant an early membership to the EEC and not a late one in 1957. There are reasons why Britain 'missed the bus', and there are also reasons that prove that Britain did not 'miss the bus' but didn't want to or need to get the 'bus'. These reasons affect the absence of involvement in the Schuman Plan talks, or the Messina talks. The reasons behind Britain's absence at the Schuman Plan talks have been summarised by Edmund Dell, a Labour MP. ...read more.

This supports the view that Britain did 'miss the bus' because the country was stuck on the belief of it having a lot of power, more than it did actually have. James Ellison described how Britain had tried to influence the European integration, encouraging a more intergovernmental community instead of the full integration the supranational community would have. In 1955 the 'Six' were encouraged to follow the OEEC system instead of the EEC, but the 'Six' stayed with the EEC. The British Treasury and Board of Trade began to see the threat of being stuck outside the customs union. In 1956 the Plan G was developed proposing a free trade area (beneficial to Britain because it could include trade with the Commonwealth), which was based on an intergovernmental system. But thought the negotiations over Plan G continued from 1957 until 1958 with the 'Six' the free trade area did not fully work, if it had Britain would have not been so isolated from Europe. This supports the view that Britain had 'miss the bus' but it also describes how Britain had tried to get into Europe a different way, which failed. The failure could have been because the EEC 'bus' was not heading in the same direction, as Britain wanted to go. The Free Trade area talks failed as the European countries such as West Germany didn't want to increase its markets in exports. Plan G also failed, Europe wanted a full supranational integration, not the more limited integration Plan G suggested. The reasons why Britain's applications between 1957 up to 1973 can all be based on the factor of General de Gaulle being President of France and his dislike for British involvement in the Europe. General De Gaulle became President in 1958; he used few political 'niceties' and immediately vetoed the Free Trade area talks. He found that without Britain's presence in the EEC France could take the leadership role without competition. ...read more.

De Gaulle rejected all of Britain's applications to join the EEC for the reasons of not being European enough, needing too many negotiations which could change the community, and because Britain was too close to America. He personally wanted to Britain to be excluded so it could not rival France's power in Europe. Once De Gaulle had retired and the new French President Pompidou too over, Britain was given membership to the EEC, having talked to British Prime Minister Heath Pompidou was convinced of his honesty and pro-European attitude. In 1957 Britain was held back from becoming a member of the EEC because of economic reasons and political reasons. Having 'miss the bus' into Europe Britain was not able to join the EEC until much later in 1973, the reasons for this time between were political and economic, but more importantly the factor of the French leader De Gaulle. Economically through the years between when Britain 'miss the bus' and the final application in 1973 Britain economy had been weakening, the strength of the sterling had been lowering and Britain had to negotiate to become a member of the EEC, over agriculture and coal and steel industries. Politically Britain was accused of not being pro-European enough, by having to divide its attention between the Commonwealth countries and its Special Relationship with America Britain could give little attention to the EEC or Europe. The last factor of De Gaulle meant that Britain did not gain membership until De Gaulle had retired. De Gaulle vetoed Britain's applications, accusing of not being pro-European enough, this may have been because he wished France to remain the leader of Europe with no competition from Britain. Also he had plans of Europe becoming a 'Third Force' independent from American influences, Britain would have joined the EEC meaning America could influence Britain who would in turn influence the other European countries. Britain finally obtained membership to the EEC in 1973, with the French President's support. ...read more.