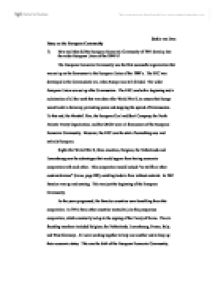 How and why did the European Economic Community of 1957 develop into the wider European Union of the 1990&amp;#146;s?

Saskia van d*m Essay on the European Community 1) How and why did the European Economic Community of 1957 develop into the wider European Union of the 1990's? The European Economic Community was the first successful organization that was set up as the forerunner to the European Union of the 1990's. The EEC was developed in the Communistic era, when Europe was still divided. The wider European Union was set up after Communism. The EEC was both a beginning and a culmination of all the work that was done after World War II, to ensure that Europe would work in harmony, promoting peace and stopping the spread of Communism. To this end, the Marshall Plan, the European Coal and Steel Company, the North Atlantic Treaty Organization, and the OECD were all forerunners of the European Economic Community. However, the EEC was the start of something new and entirely European. Right after World War II, three countries, Belgium, the Netherlands and Luxembourg saw the advantages that would appear from having economic cooperation with each other. This cooperation would include "no tariffs or other customs barriers" (Lowe, page 189), enabling trade to flow without restraint. In 1947 Benelux was up and running. ...read more.

With NATO, the United States was hoping to promote to the European countries to build up their own weapons. However, to do this, countries needed coal, steel and iron and the European Coal and Steel Community was launched on French and German initiative in May of 1950. Britain was part of NATO and this led to more of a unified European Community. Britain was finally getting involved in European affairs instead of isolating themselves as an island. Therefore, this was bringing them closer to Europe and the wider European Union. Britain was getting themselves involved in organizations. That meant that they were showing interest towards joining a wider European Union. Towards the end of 1954, new agreements were emerging. One such agreement was to let Italy and Germany join in the Western European Union. This union was to provide military assistance to the countries that needed it. It was also important because it allowed two former enemies, the Germans and the Italians, to join up with the Allies. Throughout all the different agreements and communities, Britain was not a part of them. ...read more.

Soon after, in 1981, Greece joined the EEC and later in 1986, Spain and Portugal were members as well. In 1995 membership was increased from twelve to fifteen when Austria, Finland, and Sweden all joined the community. In the 1970's countries were not allowed to join because of their political and economical status. Countries such as Portugal and Spain were refused into the EEC because of their poor economy. Greece was also another refused country because of their status. However, as the years progressed into the 1990's, countries that still did not have much economic or political power were allowed to join and have the ability to flourish. That is one difference between the '70's and '90's in the European Community. The journey of starting the European Economic Community in 1957 to the European Union in the 1990's was a long and arduous one. The American role in providing supplies and aid to Europe decreased as the threat of Communism started to decrease as well. There were problems that had risen, but with the help of the United States to a certain point, the original small European Community was able to widen its horizons to include poorer countries to develop into a more unified Europe. ...read more.