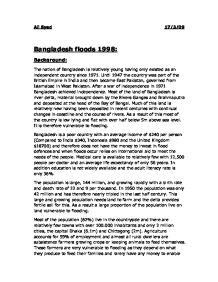 The nation of Bangladesh is relatively young having only existed as an independent country since 1971. Until 1947 the country was part of the British Empire in India and then became East Pakistan, governed from Islamabad in West Pakistan. After a war of independence in 1971 Bangladesh achieved independence. Most of the land of Bangladesh is river delta, material brought down by the Rivers Ganges and Brahmaputra and deposited at the head of the Bay of Bengal. Much of this land is relatively new having been deposited in recent centuries with continual changes in coastline and the course of rivers. As a result of this most of the country is low lying and flat with over half below 5m above sea level. It is therefore vulnerable to flooding.

Bangladesh is a poor country with an average income of $240 per person (Compared to India $340, Indonesia $980 and the United Kingdom $18700) and therefore does not have the money to invest in flood defences and when floods occur relies on international aid to meet the needs of the people. Medical care is available to relatively few with 12,500 people per doctor and an average life expectancy of only 56 years. In addition education is not widely available and the adult literacy rate is only 36%.

The population is large, 144 million, and growing rapidly with a birth rate and death rate of 22 and 9 per thousand. In 1950 the population was only 42 million and has therefore nearly tripled in the last half century. This large and growing population needs land to farm and the delta provides fertile soil for this. As a result a large proportion of the population live on land vulnerable to flooding.

Most of the population (82%) live in the countryside and there are relatively few towns with over 100.000 inhabitants and only 2 million cities, the capital Dhaka (6.1m) and Chittagong (2m). Agriculture accounts for 59% of employment and almost all rural dwellers are subsistence farmers growing crops or keeping animals to feed themselves. These farmers are very vulnerable to flooding as they depend on what they produce to feed their families and rarely have any money to enable them to buy food if the crops fail due to a flood. Many of these people are poor with over half the total population living below the poverty line of 2250 calories per day and a higher proportion in rural areas.

Physical causes of flooding in Bangladesh -

Human causes of flooding in Bangladesh -

Consequences of the flooding:

Response to the flooding:

In conclusion i think that if the Bangladesh government completes all long term actions within a short time then all will be good and when it comes to a severe flood, nothing will be at loss, but if the government fails at completing the long term action within a short time then a flood, who knows how great it could be, could fall upon Bangladesh and destroy the cultural city once again, leading to economic and population disaster.