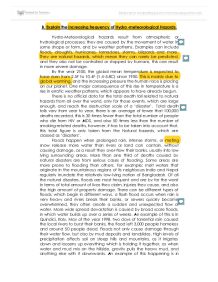 B. Explain the increasing frequency of Hydro-meteorological Hazards. Hydro-Meteorological hazards result from atmospheric or hydrological processes; they are caused by the movement of water in some shape or form, and by weather patterns. Examples can include floods, droughts, hurricanes, tornadoes, storms, blizzards and more. They are natural hazards, which mean they can rarely be predicted, and they also not be controlled or stopped by humans, this can result in more severe damage. By the year 2100, the global mean temperature is expected to have risen from 2.5F to 10.4F (1.4-5.8C) since 1900. This is mainly due to global warming, and the increasing pressure the human race is placing on our planet. One major consequence of this rise in temperature is a rise in erratic weather patterns, which appears to have already begun. There is no official data for the total death toll related to natural hazards from all over the world, only for those events, which are large enough, and reach the destruction scale of a 'disaster'. Total death tolls vary from year to year, there is an average of fewer that 100,000 deaths recorded, this is 30 times fewer than the total number of people who die from HIV or AIDS, and also 50 times less than the number of smoking-related deaths, however, it has to be taken into account that, this total figure is only taken from the Natural hazards, which are classed as 'disasters'. ...read more.

It is thought that the increase in global warming is affecting such events to occur. The North Atlantic basin offers a reliable, long term record of tropical cyclone activity on record, in terms of frequency of tropical storms and hurricanes. This was followed by 1995 hurricane season, one of the busiest in the past 50 years. In addition, the mean maximum intensity has decreased, while the maximum intensity produced by the strongest hurricanes each year has not shown a significant change. A thunderstorm can release as much energy as an atom bomb, it develops when condensation in moist rising air warms the surrounding air so that it continues to rise and produce a moisture-filled cumulonimbus cloud. They occur in hot, humid weather and can include torrential rain, strong winds, hail, thunder and lightening. The rising current of air within the cloud is known as an up draught and may reach speeds of more than 60mph. the down draught spreads out in all directions when it reaches the ground, as it comes down as hail or rain etc, this causes the gusty winds of a thunderstorm. The tops of the cumulonimbus clouds may reach a height of some 7.5 miles, while its base may loom just 3,280ft off the ground, one of these clouds is able to hold 10,000 tones of water. There are three different stages included in a thunderstorms development; first the up draught of warm air begins to form the cloud as the moisture evaporates. ...read more.

The highly suggested reason for any increase in frequency of Hydro-meteorological hazards is that they are associated with climate change. Global warming is capable to increase the magnitude and impact Hydro-meteorological hazards can cause, the warmer weather which global warming can create, are perfectly suitable circumstances and environments for hazards such as hurricanes, droughts and fires, these events can have serious consequences. Additional effects of global warming will be increased sea levels, due to melting ice caps, and avalanches. An additional suggestion for the increase in Hydro-meteorological hazard frequency is the environmental degration of land and air quality, results of population pressure on the planet. Further evidence linked with the idea that the increase in frequency of such hazards, caused by humans, is deforestation, and other losses of land covers, such as building new roads and buildings. When forests are cleared, less water is taken in at the transpiration stage of the hydrological cycle, this can result in flooding. Overall, it is not clear whether the frequency of Hydro-Meteorological hazards is increasing, as it is argued that it would simply be due to an increase in technology, and coverage of such events, which makes more and more people aware that they are happening. However, years ago such events may not have been recorded, therefore as people were not aware that they were taking place, the impression is given that they didn't happen, or were simply less frequent, as they are now. ...read more.

This answer includes some of the key ideas which should be discussed in response to the question. However, it could be significantly improved by focusing more on frequency, including providing some data on this. It contains lots of unnecessary detail about hazards such as hurricanes. It could also mention the idea that hazards always have a human element - and as there are more people and more human activity on the planet, it is likely that the same number of hazard events will actually have a bigger impact as there are more people to be affected in more places. This might explain some of the apparent increase in frequency.