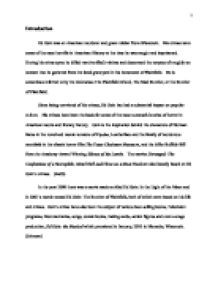 Ed Gein: The Butcher of Plainfield. Since being convicted of his crimes, Ed Gein has had a substantial impact on popular culture

Introduction Ed Gein was an American murderer and grave robber from Wisconsin. His crimes were some of the most horrific in American History at the time he was caught and imprisoned. During his crime spree he killed two (verified) victims and desecrated the corpses of roughly ten women that he gathered from the local graveyard in his hometown of Plainfield. He is sometimes referred to by the nicknames The Plainfield Ghoul, The Mad Butcher, or the Butcher of Plainfield. Since being convicted of his crimes, Ed Gein has had a substantial impact on popular culture. His crimes have been the basis for some of the most successful stories of horror in American movie and literary history. Gein is the inspiration behind the characters of Norman Bates in the novel and movie versions of Psycho, Leatherface and the family of murderous cannibals in the classic horror film The Texas Chainsaw Massacre, and the killer Buffalo Bill from the Academy Award Winning Silence of the Lambs. The movies Deranged: The Confessions of a Necrophile, Motel Hell and Three on a Meat Hook are also loosely based on Ed Gein's crimes. (imdb) In the year 2000 there was a movie made entitled Ed Gein: In the Light of the Moon and in 2007 a movie named Ed Gein: The Butcher of Plainfield, both of which were based on his life and crimes. Gein's crime have also been the subject of various best-selling books, Television programs, Documentaries, songs, comic books, trading cards, action figures and even a stage production, Ed Gein: the Musical which premiered in January, 2010 in Menasha, Wisconsin. (Johnson) His crimes and the reasoning behind them can (at least partially) be explained by integrating Social Bond Theory, Social Learning Theory, the techniques of Neutralization, and the General Theory of Crime. FAMILY BACKGROUND Ed Gein was born August 27, 1906 in La Crosse, Wisconsin to George and Augusta Gein. ...read more.

Worden's body was slit open down the front and her torso had been emptied. Her head and intestines were found in a box inside Ed's house. (Castleden) The defiled body of Bernice Worden was not the only horrific findings inside the Gein home. As the police investigated they found several ghastly belongings of Gein's. They found several female human heads that were shrunken and preserved, a rug made from human skin, a belt and bracelet made from sliced off human nipples and a chair covered in human skin. There were lamps and tables that had been made from human bones and skin and there were human skulls on the bedposts in Ed's bedroom. On his bedroom wall were the skinned faces of a number of women, one of which was Mary Hogan. In Gein's kitchen the police found bowls made from human skulls, a box of salted female-genitalia and Bernice Worden's heart on a plate. There were more female faces, but this time they were stuffed with newspaper. They also found window shades stitched together from human lips, a trash can covered in skin and a bag of four human noses. Even more disturbing was that they located various "clothing items", such as a vest made from the upper torso of a woman, a knee length item that included breasts and a vagina, and a full suit made from human flesh. Gein later said that he would dress up in these items and pretend he was his mother or pretend that he himself was a woman. Ed denied ever having sex or eating any parts of the corpses, although this is heavily disputed. (Castleden) Confession and Conviction At the beginning of the investigation Gein denied killing anybody and said that all of the bodies were corpses he had dug from the ground. After he was confronted with the evidence against him regarding Mary Hogan he admitted to two murders. ...read more.

But the thoughts that his mother instilled into his head and her approval carried more weight to him than the law. General Theory of Crime Travis Hirschi and Michael Gottfredson have developed a general theory of crime that is rooted in the notion of low self-control. According to their work, "crime is the result of individuals with low self-control encountering situations or opportunities in which crime will produce immediate gratification with relatively low levels of risk." Before his mother passed away, Ed was able to willingly demonstrate self-control during the course of his life. But after her passing Ed was no longer content with only fantasizing about the bodies of women. Ed's level of self-control lowered substantially after Augusta died. This lowered self-control helped lead him to committing the brutal and horrific crimes that he did. No longer satisfied with only using his imagination, not socially adequate enough to entertain a real woman, and his head still filled with the words of his mother on women, Ed could no longer control himself. He began robbing graves, defiling corpses, making crazy house ornaments and tools, and finally he started killing live people. When asked why he committed the crimes, Ed replied,"I had a compulsion to do it". (houseofhorrors) Conclusion Ed Gein's crimes will no doubt be remembered as some of the most deranged and horrific acts in American history. After a series of tests, Gein was declared legally insane. It is clear to see that what made him turn out this way. Ed's mother Augusta and her fanatical religious teachings and beliefs clearly influenced the development of the sick and crazy thoughts that floated around in Ed's brain. Through looking at his crimes from a Criminological view and analyzing them using the Social Bond Theory, Social Learning Theory, the techniques of Neutralization, and the General Theory of Crime perspectives, it is possible to see that while Gein was, for all intents and purposes, a monster it also seems that he was a victim of his mother's overbearing upbringing. ...read more.