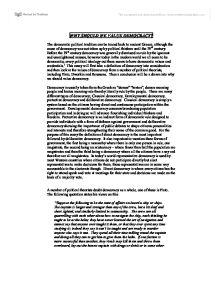 Why Should We Value Democracy?

WHY SHOULD WE VALUE DEMOCRACY? The democratic political tradition can be traced back to ancient Greece, although the cause of democracy was not taken up by political thinkers until the 19th century. Before the 19th century democracy was generally dismissed as rule by the ignorant and unenlightened masses, however today in the modern world we all seem to be democratic; every political ideology out there seems to have democratic values and credentials.i This essay will first take a definition of democracy into consideration and then look at the values of democracy from a number of political theorists, including Plato, Dworkin and Rousseau. Then a conclusion will be a drawn into why we should value democracy. Democracy is usually taken from the Greek as "demos" "kratos", demos meaning people and kratos meaning rule thereby literally rule by the people. There are many different types of democracy; Classical democracy, Developmental democracy, protective democracy and deliberative democracy. Classical democracy is simply a system based on the citizens having direct and continuous participation within the government. Developmental democracy concerns broadening population participation and in doing so will advance flourishing individual thinkers and freedom. ...read more.

It does allow some sort of political participation although it is arguable how much and it certainly doesn't allow active action. We can evidently refer back to Rousseau's quote of "there has never been a true democracy and there never will be"xi as it shows a remarkable sense of truth, as Winston Churchill also famously quoted "Democracy is the worst form of government, except all the others that have been tried" Which also shows an incredible sense of truth, it is in principle a way of achieving the 'right result' that is at least as good as or better than the rule by experts. i Andrew Heywood, Political theory an introduction, democracy representation and the public interest, third edition 2004 ii Plato, Republic, 282 iii Jonathan wolf, introduction to political philosophy, who should rule, pg 67 iv -jeacques Rousseau, the social contract, bk II chapt4 p. 205 v Alan Cromatie, Rousseau notes, lecture vi Jean-jeacques Rousseau, the social contract, bk III,chpt 15, pg 266 vii Jean-jeacques Rousseau, the social contract, bk III, chapt 5 viii John S. Mill, representative government, 299 ix Christiano, T., 2004, "The Authority of Democracy," Journal of Political Philosophy, Vol. 12, n. 3 (August): pp. 266-290. x Ronald dworkin, sovereign virtue, political equality, chapt. ...read more.