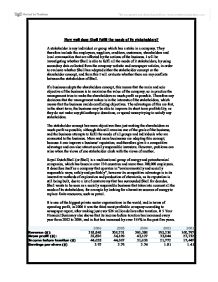 How well does Shell fulfil the needs of its stakeholders?

In fact Shell was one of the only major oil companies to turn a profit in the 2nd quarter of 2007 (April to June), after a fall in profits was expected due to a 2% decrease in production. Furthermore, earnings per share have increased by over 168% in the past 5 years, which shows that the value of their investment is improving continuously. However, the controversy surrounding Shell often leads to a fall in share prices, for example when Shell overstated its oil reserves by 20%, which caused investor anger, and a lot of selling of shares, which decreased the companies market value by $15 billion. A record profit is good news for employees, as if the company is growing, and then there is more money to explore for oil and gas, which means that their jobs are more secure. An example is Shell's �350 million investment programme for investments in Scotland, which it says will safeguard 300 jobs and create 100 new contractor jobs. Furthermore, Shell tried to address it social Royal Dutch Shell's website says it recognises that employees are also a valuable stakeholder in the company and that their opinions are of the utmost importance, so it has a very democratic style in that it tries to listen to all employees and discuss are held before decisions are made, as they believe that that this management style is the best fit for their company. ...read more.

Overall, I believe that for such a competitive industry such as energy and chemicals, and with such a large company such as Shell, it is inevitable that there will be some clashes between stakeholders (such as the environmentalists and the stakeholders), because they all have different aims. I also believe that is impossible for Shell to fulfil all the needs of its stakeholders, because clashes between stakeholders means Shell often has to side with one or a group of stakeholders, which at the moment seems to be the shareholders. I believe Shell must do more to prove that it is a socially responsible company, in order to satisfy the needs of more of its stakeholders, for example doing more to address safety concerns and increasing the investment in local communities in the countries where it explores for oil and gas, and increasing the amount of money it puts into making its process as environmentally friendly as possible. Although, initially this would cost some money, the shareholders would eventually see a return in the longer term, because the benefits of building a reputation as a socially responsible company would attract a lot of new customers. Furthermore, it would attract the best graduates to the company, and would mean fewer disputes with local communities and governments, which would not only save money but also benefit Shell's reputation. ...read more.