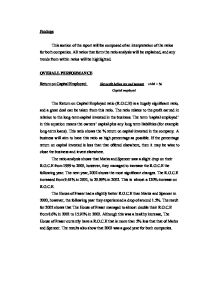 Findings This section of the report will be composed of an interpretation of the ratios for both companies. All ratios that form the ratio analysis will be explained, and any trends from within ratios will be highlighted. OVERALL PERFORMANCE Return on Capital Employed: Net profit before tax and interest x100 = % Capital employed The Return on Capital Employed ratio (R.O.C.E) is a hugely significant ratio, and a great deal can be taken from this ratio. The ratio relates to the profit earned in relation to the long-term capital invested in the business. The term 'capital employed' in this equation means the owners' capital plus any long term liabilities (for example long-term loans). This ratio shows the % return on capital invested in the company. A business will aim to have this ratio as high percentage as possible. If the percentage return on capital invested is less than that offered elsewhere, then it may be wise to close the business and invest elsewhere. The ratio analysis shows that Marks and Spencer saw a slight drop on their R.O.C.E from 1999 to 2000, however, they managed to increase the R.O.C.E the following year. The next year, 2002 shows the most significant changes. The R.O.C.E increased from 9.61% in 2001, to 20.89% in 2002. This is almost a 120% increase on R.O.C.E. The House of Fraser had a slightly better R.O.C.E than Marks and Spencer in 2000, however, the following year they experienced a drop of around 1.5%. The result for 2002 shows that The House of Fraser managed to almost double their R.O.C.E from 8.6% in 2001 to 15.91% in 2002. Although this was a healthy increase, The House of Fraser currently have a R.O.C.E that is more than 5% less that that of Marks and Spencer. The results also show that 2002 was a good year for both companies. PROFITABILITY Gross profit Margin. ...read more.

This may be due to a number of factors. In late 2001, the chairman, Luc Vandevelde set out a number of objectives in a recovery programme, one of the major objectives of this re structuring programme has been the aim to return capital back to the company by selling or closing its European stores (Farndon, 2002. Daily Mail). By selling off large numbers of loss making European stores, the company has been able to reduce the volume of money owed to creditors, and has thus reduced the capital employed. The sale of these stores led to a figure for total capital employed in 2002 of only �3.081 million. This is a reduction of over �1.5 million in a year. The reduction comes by the fact that there is a far smaller capital expenditure in 2002, in fact they made money, where as in 1999, when the European expansion started, capital expenditure was �628.1 million. The results in 2002 show that Marks and Spencer started to recoup capital that was previously employed. This inevitably leads to a higher R.O.C.E. Also, the figure for cost of sales for 2002 is at its lowest point over the four-year period. This makes a very big difference to the ratio. A reduction in capital employed, and an increase in sales will give an increase in R.O.C.E. A group of ratios that highlight a number of problems for Marks and Spencer are the productivity ratios. When compared to the results of the ratio analysis of The House of Fraser, Marks and Spencer's results are poor. A ratio from the productivity group of ratios is the asset turnover ratio. This ratio shows the number of times the assets utilised by the business have been covered by sales. Both Marks and Spencer and The House of Fraser are in the retail sector, so it would be expected that the results should follow the same trends. ...read more.

By reducing the levels of stock being held, the company could also improve asset turnover. This would be due to the fact that less warehouses would be needed, giving Marks and Spencer the opportunity to sell or lease these unwanted assets. When dealing with the clothing market, Marks and Spencer have to be aware of seasonal and fashion trends. A problem they have faced in the past is that they have overestimated demand for a particular season of clothing range. This inevitably leads to surplus stock. There are many external factors affecting the seasonal demand. For instance, this winter seasons demand was less than expected due to the late summer that Britain experienced. Customers were still buying summer wear, or were simply waiting to buy their winter wear until they felt the weather changed. The year 2000 saw Marks and Spencer putting �400 million of unsold stock in the winter sales, this caused a great loss in revenue. This problem could have been avoided with a more efficient purchasing system. By changing the purchasing system to a 'just in time' system, the chances of being left with surplus stock would be greatly reduced. Fashion trends are changing constantly. The company needs to be more flexible with the volume and style of clothing they stock. People are much more fashion conscious than they used to be, it is essential for the credibility of a company that they are consistently at the height of fashion. The results for the debtor's collection period for Marks and Spencer are very worrying, especially when compared to The House of Fraser. Marks and Spencer need to dramatically reduce the collection period in order to avoid any problems in the future. Marks and Spencer currently offer their customers the option of having a store card. Although in theory, this is a good idea, especially form a marketing perspective; it can cause many problems in the long run. Customers can leave payment for long periods of time. This leads to Marks and Spencer not being paid for stock they no longer own, and should have been paid for ...read more.