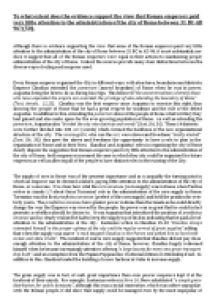 To what extent does the evidence support the view that Roman emperors paid very little attention to the administration of the city of Rome between 31 BC-AD 96?

Tiberius. 48) but Tacitus accuses Nero of actually starting the Great Fire of AD 64 as an excuse to build himself a new palace. Although Tacitus does not outright say Nero did start the fire, he very much implies this with his phrasing of sentences such as ?whether it was accidental or caused by a criminal act on the part of the Emperor? and ?Nero profited by his country?s ruin to build a new palace?. It is difficult to dispute the accusation due to Nero?s history with criminal activity; however, it must be borne in mind that Tacitus was also the one to accuse Nero of such criminal activity and that Tacitus is renowned for taking out his anger towards Domitian (whose reign he lived under) on other Emperors throughout his writing and so is likely to have used this as a way of shunning Nero?s reign. On the other hand, it is known that Nero did indeed build himself a new palace in light of the fire as parts of it still stand today. Either way, Nero?s reaction to the fire was poor as he put his needs before his people?s; the building of the Domus Aurea (?Golden House?) ...read more.