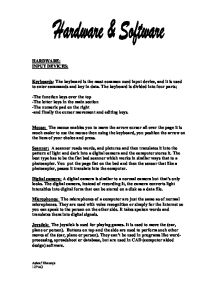 HARDWARE: INPUT DEVICES: Keyboards: The keyboard is the most common used input device, and it is used to enter commands and key in data. The keyboard is divided into four parts; -The function keys over the top -The letter keys in the main section -The numeric pad on the right -and finally the cursor movement and editing keys. Mouse: The mouse enables you to move the arrow cursor all over the page it is much easier to use the mouse then using the keyboard, you position the arrow on the item of your choice and press. Scanner: A scanner reads words, and pictures and then translates it into the pattern of light and dark into a digital camera and the computer stores it. The best type has to be the flat bed scanner which works in similar ways that to a photocopier. You put the page flat on the bed and then the sensor that like a photocopier, passes it translate into the computer. Digital camera: A digital camera is similar to a normal camera but that's only looks. The digital camera, instead of recording It, the camera converts light intensities into digital form that can be stored on a disk as a data file. Microphones: The microphones of a computer are just the same as of normal microphones. ...read more.

They are flat and are made of a substance called mylar. They have a magnetic surface which allows the recording of your data. Zip Drive: A zip drive is similar to a floppy drive but a zip drive works faster then a floppy drive a holds 100mb of data, that's 70 times more faster then a floppy drive. DVD Drive: DVD-ROM or (digital versatile disk, or disk read-only memory) is the same diameter as a CD but holds nearly 10 times the data. A DVD can hold between 4.7Gb and 15.9Gb data and, while it requires its own drive, the DVD drive can run the existing CDs. They have provided a way of watching digital-quality films or other entertainment. Backing up: Even if you save your work in a computer drive, you should keep the back-up copy. Most organisations would agree because they have large amounts of work to store so they do this process of backing up. OUTPUT DEVICEES: VDU: VDUs display images (characters or graphics) generated by the computer's video adapter. The image on the screen is referred to as 'soft copy'-you will lose it when the computer is turned off. Most VDUs use a cathode ray tube (CRT) which accounts for their size. Printers: when you need a hard copy of information on screen you will need a printer. ...read more.

It has been designed so that people don't have to waste time writing a letter when they can easily send through the E-mail. E-mails are known to be legal documents, you can be prosecuted if you write something that could be construed as libellous. Utilities: These programs provide diagnostic and measurement routines that check the performance of your computer. An e.g. of this is Anti-virus software which is a utility program that can scan any files for any virus, it can also detect a virus as well. PROGRAMMING LANGUAGES: Computers software is written in a programming language. Some are very complex and may require experts to use them. The two e.g. of these are C++ and Java. There are those languages which are produced by the computer automatically when writing macros. STAGES OF DEVELOPMENT: Before you can design or write a computer program, there are many stages of development that you must go through when doing this process, these are as follow; - Analysis of the requirement - what does the computer program need to achieve? - Design of solution. - Development of the program - probably broken down the into small subprograms. - Implementation and testing of the program, including training of the eventual users of the program. - Preparation of documentation, which will include documentation relating to the actual program and documentation for the users (i.e. a users' guide or manual). - Ongoing maintenance and development of the program. Ashraf Khawaja 12PAG ...read more.