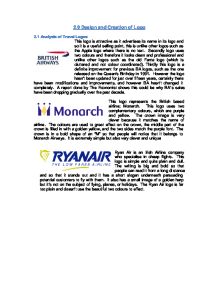 2.0 Design and Creation of Logo 2.1 Analysis of Travel Logos This logo is attractive as it advertises its name in its logo and so it is a useful selling point, this is unlike other logos such as the Apple logo where there is no text. Secondly logo uses two colours and therefore it looks clean and professional and unlike other logos such as the old Fanta logo (which is cluttered and not colour coordinated). Thirdly this logo is a definite improvement for previous BA logos, such as the one released on the Queen's Birthday in 1991. However the logo hasn't been updated for just over fifteen years, certainly there have been modifications and improvements, and however BA hasn't changed it completely. ...read more.

The writing is big and bold so that people can read it from a long distance and so that it stands out and it has a short slogan underneath persuading potential customers to fly with them. It also has a small image of a golden harp but it's not on the subject of flying, planes, or holidays. The Ryan Air logo is far too plain and doesn't use the beautiful two colours to effect. 2.2 My Logos 2.3 My Final Logo Mr Jones chose this logo, because he believed this logo represents the ethos and nature of the company. This is one of the only logos to have the slogan of the company underneath. He believed that this was an essential marketing point, which reflects the company. ...read more.

Suggest an alternative way for completing the task and what other hardware or software could you have used? For this task I could have used different programs or I could have edited my drawn designs on the computer Software Microsoft PowerPoint 2003/7 Adobe Photoshop CS2 Hardware Apple Mac (OS 3.0 Beta) How well did this task work? Overall I think I did quite well on this task, as I managed to use different programs and explore the different features of them, also I looked at the differences in the features between Microsoft Word 2003 and Microsoft 2007, I feel this has benefited me greatly. My logos look professional and smart, and I am pleased and the end result, however I feel I could've put a slogan on all of the logos, not just one. ...read more.