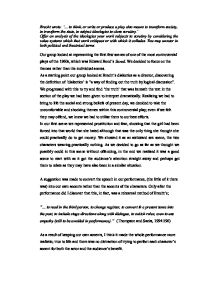 Analysis of the first few scenes of one of the most controversial plays of the 1960s, which was Edward Bond's Saved.

Brecht wrote: '... to think, or write or produce a play also means to transform society, to transform the state, to subject ideologies to close scrutiny.' Offer an analysis of the ideologies your work subjects to scrutiny by considering the value systems which that work critiques or with which it colludes. You may answer in both political and theatrical terms. Our group looked at representing the first few scenes of one of the most controversial plays of the 1960s, which was Edward Bond's Saved. We decided to focus on the themes rather than the individual scenes. As a starting point our group looked at Brecht's dialectics as a director, discovering the definition of 'dialectics' is "a way of finding out the truth by logical discussion". We progressed with this to try and find 'the truth' that was beneath the text in the section of the play we had been given to interpret dramatically. Realising we had to bring to life the social and strong beliefs of present day, we decided to take the uncomfortable and shocking themes ...read more.

"Brecht's theatre shows us the variety of artistic techniques because he makes us know that we can not only find beauty in emotional theatre, but also in reasonable theatre." (Hyoung, http://www.lancs.ac.uk...) "Brecht wants the audience think about the events but not get drawn in emotionally by the characters. Brecht developed a new type of theatre which he called Lehrst�ck "learning play." Brecht described them as "a collective political meeting" in which the audience is to participate actively." (Kellner, http://dogma.free.fr...) Originally we planned to have a great deal of audience participation throughout our performance. During a later rehearsal we realised that a constant close relationship with our audience would probably create the opposite genre of what we wanted, which was any form of comedy. By using the small piece of intervention with our audience during our second scene, not only did it make them feel uneasy, it also brought another sense of reality to our piece. The audience probably realised that as they were the victims in this scene, anybody could be a victim of the type of life portrayed by the characters. ...read more.

I feel that such involvement, interaction and interest from the live audience we performed for made them think about today's situation of murder, violence, prostitution and child abuse, even though we performed our piece with hardly any dialogue and with a hidden meaning. I really do believe that our audience did think about our performance when they left, thought about the meanings outside the four walls of the theatre; relating them to our world today. The alienation device Brecht used was the most important way of achieving the result as it was intended to present the familiar world in an unfamiliar way. Although Brecht did not have an organised theory of the theatre, his only organised belief was Marxism and he even used this in his own, individual way. The essential purpose of epic theatre was to challenge the everyday way in which we see things, which we automatically accept as "normal" and make us see with fresh eyes. ...read more.