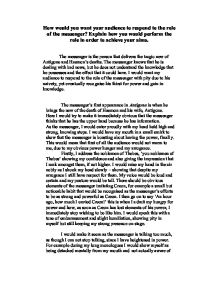 Antigone. How would you want your audience to respond to the role of the messenger? Explain how you would perform the role in order to achieve your aims.

How would you want your audience to respond to the role of the messenger? Explain how you would perform the role in order to achieve your aims. The messenger is the person that delivers the tragic new of Antigone and Haemon's deaths. The messenger knows that he is dealing with bad news, but he does not understand the knowledge that he possesses and the effect that it could have. I would want my audience to respond to the role of the messenger with pity due to his naivety, yet eventually recognise his thirst for power and gain in knowledge. The messenger's first appearance in Antigone is when he brings the new of the death of Haemon and his wife, Antigone. ...read more.

My voice would be loud and certain and my posture would be tall. There should be obvious elements of the messenger imitating Creon, for example a small but noticeable habit that would be recognised as the messenger's efforts to be as strong and powerful as Creon. I then go on to say 'An hour ago, how much I envied Creon!' this is when I admit my hungry for power and how, as soon as Creon has lost elements of his power, I immediately stop wishing to be like him. I would speak this with a tone of embarrassment and slight humiliation, showing pity in myself but still keeping my strong presence on stage. ...read more.

Of course this would show the audience that the messenger is simply being self-centred and egotistical. My last lines in the play would be 'she heard my bitter story; then she put a dagger to her heart and drove it home'. Here, I would finally show some sort of remorse for the news that I had to deliver, although I would place emphasis on the word 'my' to make it clear to Creon that I had played a big part in this event and hinting that I should be rewarded. I would exit the stage through the centre upstage exit, as I would believe that I had the centre of attention within that moment. I would exit looking thoroughly pleased with myself, unknowing the levels of pain that I had set off. Alicia Day. Word count: 650 ...read more.