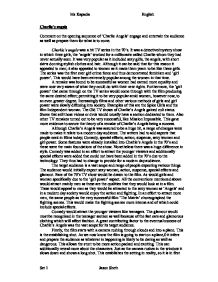 Charlie's angels - Comment on the opening sequence of 'Charlie Angels' engage and entertain the audience as well as prepare them for what is to come.

Charlie's angels Comment on the opening sequence of 'Charlie Angels' engage and entertain the audience as well as prepare them for what is to come. Charlie's angels was a hit TV series in the 70's. It was a detective/mystery show in which three girls, the 'angels' worked for a millionaire called Charlie whom they had never actually seen. It was very popular as it included sexy girls, the angels, with short skirts donning stylish clothes and hair. Although it can be said that for this reason it appealed to men; it also appealed to women as it made them yearn to be like these girls. The series was the first ever girl crime force and thus demonstrated feminism and 'girl power'. This would have been extremely popular among the women in that time. A remake was bound to be successful as women had earned more equality and were now very aware of what they could do with their new rights. Furthermore, the 'girl power' that came through on the TV series would come through with the film producing the same desired effect; permitting it to be very popular amid women, however now, to an even greater degree. Increasingly films and other various methods of girls and girl power were slowly diffusing into society. Examples of this are the Spice Girls and the film Independent woman. The Old TV shows of Charlie's Angels gained cult status. Stores that sell those videos or dvds would usually have a section dedicated to them. Also other TV remakes turned out to be very successful, like Mission Impossible. This gave more evidence to secure the theory of a remake of Charlie's Angels being a success. ...read more.

Once they have landed on a boat, we see Cameron Diaz wearing a gold bikini. This represents the glamour in the film. She looks sexy and the make up has made her look near perfect. This signifies one of the main elements of the film, glamour and sexy women and thus shows the audience that there is going to be plenty of it during the film. The comedy here is when LL turns into Drew Barrymore. This infers to the audience that there is going to be a comical theme to the film. There is a final three shot of the Angels riding away in the boat. The audience now get the impression that the three angels are very close and work as a team. As they speed off, heavenly music is played, this infers the angels angelic ways and again contributes in showing the angels personalities. When the Angels are introduced, the silhouettes of the Angels move onto the screen. These silhouettes remind the viewers of the old TV series; as this was the same picture silhouette that was used at the beginning of the old TV series. While this goes on, and 80's era music plays. This again reminds and draws the people who used to watch the old TV series. Reds, oranges and yellows are displayed on the screen. These were the main colours used at the beginning of Charlie's Angels and represent the era of the time. This will entice the audience to expect that it will have the main foundation of the old TV series. The camera illustrates a split screen. All the Angels are captured within a three shot with different colours, red, orange or yellow in the background of each. ...read more.

In the opening sequence of Charlie's Angels we see some of the conventions of the original Charlie's Angels. These are firstly, the action and danger we see in the triptych and the fire with various colours in relation to reds and oranges. Charlie being the powerful leader of the Angels. He is again the one who is looked upon with respect and is thought by the audience to be all powerful. The conventions of the three sexy girls and girl power prevail also. We see them undertaking fighting moves before the triptych and thus see girl power. A mixture of techniques are used to demonstrate their sexy nature. Hair-flicks are used most commonly and a sly grin afterward. This shows that they are not only sexy but enjoy being sexy and powerful. I think the director has been most successful in building up tension, excitement and entertainment in the audience by combining the sexy woman with action and special effects. With this combination it makes the audiences feel good when the three Angels are 'defeating' people but feel sorry for them when they are being 'beaten up' because they are women. It gives a entirely different outlook on a action and detective film when it is starring sexy women. Nobody has ever done it before in a film, it was a new experience. In conclusion, I think that no one reason can be singled out to be more largely accused of helping Charlie's Angels successful. It was released at the right time, with the right 'ingredients' and with famous actors. All reasons are just as important as the others and possibly if you lost any of the 'ingredients' of the film than it might not have been such a hit. Ms Kapadia English Set 1 Jason Sheth ...read more.