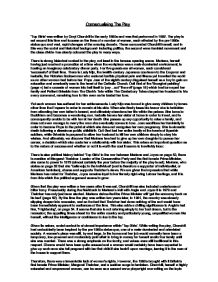 Contextualising The Play 'Top Girls' was written by Caryl Churchill in the early 1980s and was first performed in 1982. The play is set around this time and focuses on the lives of a number of women, each affected by the pre-1980s status quo and vast, rapid changes of the ensuing decade. These surrounded Churchill herself, and in this way the social and historical background- including politics, the second wave feminist movement and the class divide- has clearly coloured the play in many ways. There is strong historical context to the play, not least in the famous opening scene. Marlene, herself having just received a promotion at a time when the workplace was a male-dominated environment, is hosting an imaginary celebratory dinner party. Her five guests are all women, each considered 'successful' of their time. There is Lady Nijo, the twelfth-century Japanese courtesan to the Emperor and Isabella, the Victorian Scotswoman who endured terrible physical pain and illness yet travelled the world as no other woman had before her. Pope Joan of the eighth century disguised herself as a boy to gain an education and eventually rose to the head of the Catholic Church. Dull Gret of the 'Brueghel painting' (page v) led a crusade of women into h**l itself to 'pay...out' 'the evil' (page 18) which had torn apart her family and Patient Griselda from The Clerk's Tale within The Canterbury Tales obeyed her husband to his every command, remaining true to him even as he tested her love. ...read more.

There was a strong emphasis on the family, and values were still traditional in this respect. Divorce would have been quite unusual and a woman would certainly have been expected to give up work once she fell pregnant with her first child if she hadn't upon marriage, leaving it to the man of the house to support them. Therefore, there was a lamentable lack of women's rights. However, the 1980s brought with it Britain's first female Prime Minister, Margaret Thatcher, and a sudden surge in feminism. Churchill, herself a highly educated and empowered woman, can be seen as a second wave playwright- one writing on the topic and in support of the second wave of feminism which occurred in the 1960s and 70s (the first having taken place at the turn of the century with the Suffragettes). Yet for most of the play she appears to be arguing against feminism, or rather, against Margaret Thatcher's views of it. Thatcher and 'Reagan' (page 53), the American President who rose to power in 1981, both supported American feminism. This set of ideals focussed primarily on the individual gain, with little regard for those Marlene describes as the 'stupid', the 'lazy' and the 'frightened' (page 54). These views are certainly held by Marlene, and in many ways Churchill shows them to be a destructive force against her life and ethics. ...read more.

It also enabled dramatists such as Churchill to produce political works which challenged mainstream views and yet would still draw in an audience. Through 'Top Girls', Churchill is undoubtedly targeting the feminist audience of the 1980s. It is, after all, a play performed solely by female actors, dealing with highly pertinent feminist issues, and in many ways Churchill appears to present these women in a sympathetic light. The first scene, for example, appears dedicated to winning the audience's compassion for the five great historical women who lost and endured so much. Yet there is also a sense that the play is directed not just at those Churchill supported but equally- or even more- at those she did not. After all, Marlene herself is nothing if not the perfect example of a strong Thatcherite woman, subscribed to American feminism and her personal gain. The tragedy that lies hidden within her story and is echoed throughout almost every other 'successful' character becomes cautionary when viewed in this light; a warning to these women to reassess their own views and perhaps even to work together for equality rather than pushing themselves forward into a world which will not always look kindly upon them. It is also possible that Churchill is trying to convey a message to a less-receptive audience; the 'Mrs. Kidds' of the 1980s. By projecting popular anti-feminist sentiments onto a character designed to be dislikeable, it may be that Churchill is also encouraging the supporters of the pre-1980s status quo to examine their own motives and reasoning, and to inspire them to reconsider their views. ...read more.