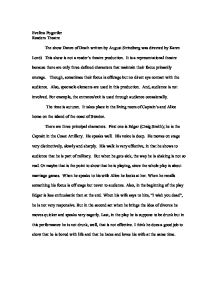 Evelina Pogoriler Readers Theatre The show Dance of Death written by August Strindberg was directed by Karen Lordi. This show is not a reader's theatre production. It is a representational theatre because there are only three defined characters that maintain their focus primarily onstage. Though, sometimes their focus is offstage but no direct eye contact with the audience. Also, spectacle elements are used in this production. And, audience is not involved. For example, the entrance/exit is used through audience occasionally. The time is autumn. It takes place in the living room of Captain's and Alice home on the island of the coast of Sweden. There are three principal characters. First one is Edgar (Craig Smith); he is the Captain in the Coast Artillery. He speaks well. His voice is deep. He moves on stage very distinctively, slowly and sharply. His walk is very effective, in that he shows to audience that he is part of military. ...read more.

Throughout the play she is very enthusiastic; she is running around, heating notes on piano, fighting with her husband, cooking (wears an apron), and playing cards eagerly. In the mist of running around she is been sexy with her cousin Curt (Jason Crowl). The way Alice looks at him, and been so flirtatious. So, Elise Stone has to play dualism because at some moments she is loving and kind and other time she is full of hate. An actress is mostly strong in her character but sometimes weak. The last principle character is Curt (Jason Crowl). This character exists to make the couple react. It's the most difficult part in this show. For the most part the actor does a good job. He is been heard, he is articulating well. The only thing that is ineffective about Curt that he stands with his back to the audience sometimes. ...read more.

For example, when Alice told Curt that it is not his children, he is in rage. So the red light is fallen on the poster on the wall. Also, scenes change in darkness. The costumes designed by Robin I. Shane are corresponding with characters roles. In the beginning we see Edgar that is dressed in the green Military Uniform. He is wearing boots. On the back of the boots there are metal spurs that are very effective when he walks. At some point he wears black pants and white short that's when he is not in shape. He also got a military coat that he wears when he leaves home. Alice's wardrobe is sexy and dressy. She wears black dress and white pearls, then robe with fur, and then red skirt. And Curt is dressed in tuxedo and a suit. Overall, the play is ok, except it is really long for something that ends where it starts. The use of old woman it's ineffective. But the use of TV sets is very effective. It shows contrast between old times and contemporary times. ...read more.