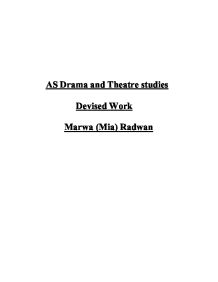 AS Drama and Theatre studies Devised Work Marwa (Mia) Radwan Contents: Section 1 - Inspiration and Influence Section 2 - Research Section 3 - Health and safety Section 4 - Development of the play and my role Section 5 - Final evaluation Inspiration and Influence In my AS theatre studies course we have studied, Antigone a Greek tragedy by Sophocles and, Yerma by Federico Garcia Lorca which is a Spanish play based in the countryside of Andalusia. Both plays have their main characters female and both surround around the "injustice" they have been through the main reason being men and the patriarchy society they're in. So from both the plays we've studied we get a feeling of a "battle between the sexes" they both create the idea of women "fighting back". This was our group's first inspiration for our devised piece we decided to base our play around the treatment of women and the unity of women coming together to fight against men, because of the unfairness towards women. This idea of all women against their men gave me the idea of a scene from the production of Chicago the musical, where all these women are together in jail for having killed their husbands/boyfriends in a variety of ways and they all sing of how "He had it coming", making it the men's fault. I thought this idea of fighting back but then justifying it because these men are "cruel" and so deserve punishment, this could also be used in our play. This scene is a musical scene they are all singing and dancing, it's also quite creative in that it starts off with simple sounds that each woman makes to represent her "story" for example one woman keeps repeating the word "pop" you later find out when she explains her story (in song) that her man kept making that pop sound with his gum and that's what irritated her into shooting him dead! ...read more.

I started to think of how we could do this and I remembered a scene from my favourite TV show Friends where the three main female characters wanted to get rid of everything of their ex's and phoebe the gypsy type character told them to throw everything that's theirs or they gave them into a fire and that's a remedy of letting go of their man. I liked the symbolism in the idea of the fire and their personal items representing them, when I told this to the group we then came out with the idea of making the "come back" a fire "voodoo" scene! This way we could represent the women's anger and frustration in a strange way as if it's driven them insane and they just need to let it all out and this is their way. And the good thing about theatre is we can show this in a stylised performance and make it completely out of the ordinary. The "revenge voodoo" scene was the first scene we tried out, Dee volunteered to be the guy, the rest of us were then to be the angry women, Dee was defiantly on the ball that lesson I think she worked better when actually physically doing work she came up with the idea of having the guy wrapped in rope and each women had a piece of it in their hand and they were all tugging at him so that he was moving in different directions, and she also thought of a rock song that was appropriate for this scene. But then when trying to move on from there we realised it was far too complicated to do the individual stories of each women with that one guy because there were simply too many women, that's when we thought of having three couples and this left out an actor (Beatrix) we thought of just having her as a mystical character, a devil like creature that likes to stir things and will be in ...read more.

This is important that we all help each other out if someone gets confused or forget their lines if we feel out the gap and improvise with it which I ended up doing on the tap because Priya had forgotten one of her lines so I said her line but in a different way so that I was asking it to her in a question and she could just agree to it. The most important section we need to work on is our ending which isn't complete because we need music and need to figure out the choreography etc... I think it'd be useful to also make a clear definition when it has changed from stylised to realistic to documentary because we are just going from one to the next which makes it seem a bit scruffy perhaps if for example we had a news report tune before the documentary starts to give it a bit of an introduction. And in the stylised we could all say the words in cannon of the woman that is in the scene (e.g. innocence) repeatedly to give it that creepy atmosphere and making sure the audience know it isn't realistic. Overall the play came along very well, we all listened to each other and took on ideas and decided everything as a group so that we were all in agreement, we really worked together like a team, which I think pays off in our work. Everyone participated in what they thought of the scenes, lighting, music etc and all the actors had a great deal of respect for each other which made it easier to act side by side and help each other out. There may have been some weaker actors that came late and didn't give as much input into the piece and there were the stronger actors that held the play together, but everyone deserves credit for the amount of work put into the acting of our play. ...read more.