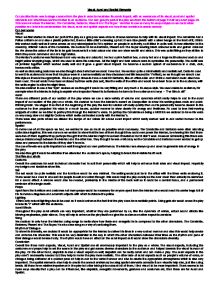 Visual, Aural and Spatial Elements Our practical task- was to stage a scene from the play in order to maximise its comic impact, with an awareness of its visual, aural and spatial elements and what these communicated to an audience. Our own group's part of the play was from the bottom of page 8-half way down page 13. This scene involves The Maniac, The Constable, Bertozzo, Pissani and The Super. We tried to use as many Fo-esque styles as we could when possible and take into consideration the visual, aural and spatial aspects and how these combine to create comedy. Our own scene Visual When we first started to direct our part of the play as a group we were able to choose costumes to help with its visual impact. The constable had a Police uniform on and also a plastic police hat, it was a little child's dressing up hat. It was blue plastic with a silver badge on the front of it, I think this worked really well as it came across as very stereotypical to Fo's opinion on people in authority, so it fitted in quite well. It drew attention to the cowardly, childish nature of the Constable. We decided to have Bertozzo, Pissani and The Super wearing black coloured suits and golden coloured tie. ...read more.

Fo used to love fast-moving snippets of action so we tried to portray this through the Maniac's voice. To portray the Constable as being a bit thick we decided to have his voice as very deep, slow and slightly Cockney which really contrasted aurally with the Maniac's. There were also parts where we altered the tempo of our voices for added aural impact which really worked well to add verbal humour to the performance. Spatial- To make use of all the space we had, we wanted to use as much as possible when necessary. The Constable and Bertozzo were often standing quite close together, this was done as we wanted to show that the two of them thought they could over power the Maniac, by showing him that there were two of them together they perhaps thought that the Maniac might have been threatened but it didn't work. However contrasting this there was always distance kept between the Maniac and the other two. They thought he was a bit crazy so the Constable and Bertozzo never wanted to get up close and personal to the Maniac if they didn't have to. The use of levels was quite important as well throughout our own performance. The Maniac was always up and down to generate lots of energy in the play. ...read more.

This would be very dissimilar to the way in which the other characters delivered their lines as the rhythm and pace of their dialogue would be less hasty. The rhythm would have an effect on the aural impact as it would show the characters diversity. Conclusion Overall the three main aspects, Visual, Aural and Spatial are all enormously important to the play as a whole. The visual aspects, including the costumes and props help to set the scene in the play and get across diverse characters to the audience and helped towards the visual humour of the play. On the other hand, slapstick is also a visual aspect as well; slapstick can be really comic and can make a play. The aural aspects in the play aren't necessarily needed but they help to make the play more realistic. The other side of aural aspects such as people's volume of voice, or dialogue being delivered at a quicker pace all help to add to the verbal humour and also to create the appropriate atmospheres which is also very important. The spatial elements also help to create the correct ambience; by using spatial elements correctly it can visually help also, just like using levels. All three have relative importance in the play but after taking into account all of them, I find visual to be more important. There seems to be more ways visually that a play can be influenced, like slapstick, energetic movements, gestures and costumes etc, than there are for Aural and Spatial. ...read more.