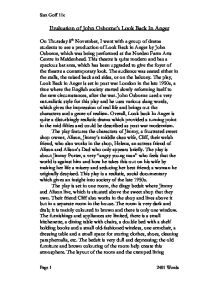 Evaluation of John Osborne's Look Back In Anger

Evaluation of John Osborne's Look Back In Anger On Thursday 8th November, I went with a group of drama students to see a production of Look Back in Anger by John Osborne, which was being performed at the Norden Farm Arts Centre in Maidenhead. This theatre is quite modern and has a spacious bar area, which has been upgraded to give the foyer of the theatre a contemporary look. The audience was seated either in the stalls, the raised back and sides, or on the balcony. The play, Look Back in Anger is set in post war London in the late 1950s, a time where the English society started slowly reforming itself to the new circumstances, after the war. John Osborne used a very naturalistic style for this play and he uses various slang words, which gives the impression of real life and brings out the characters and a genre of realism. Overall, Look back In Anger is quite a disturbingly realistic drama which provided a turning point in the mid fifties and could be described as post war modernism. The play features the characters of Jimmy, a frustrated sweet shop owner, Alison, Jimmy's middle class wife, Cliff, their welsh friend, who also works in the shop, Helena, an actress friend of Alison and Alison's Dad who only appears briefly. ...read more.

When she argues with Jimmy she stands up to him and she doesn't become a victim in the way that Alison does. Helena is also very direct and she walks with conviction. Her body language tells us that she is confident and authoritative because she holds her head up high, she stands tall and her high-heels give the impression of authority because the other characters wear flat shoes. She also walks confidently and has conviction in her step; when approaching other characters she knows exactly where she is going and is in complete control of her body. This is shown when she slaps Jimmy because it was a bold action and an invasion of his personal space, which would require confidence and conviction. Also when she kisses him, because this would also need confidence, if he hadn't kissed her back it would have been extremely embarrassing and it is an action that requires a certain amount of self-confidence. Her voice is other proof of her confidence as her projection is loud and clear in comparison to Alison's uncertain and feeble tone. She also uses her language to show her class as she is quite articulate and her accent is well pronounced and genteel. The mannerisms of Cliff, the loyal friend of both Jimmy and Alison, are quite significant throughout the play. ...read more.

His disposition is somewhat tragic though because his actions seemed to be based on revenge rather than the pursuit of happiness. His movements also implied his anger because of the tension in his body but his movements were also very direct which told of his confidence in the security of his life and those around him. He also used his voice to good effect because his bitterness could be heard clearly and the ways in which he changed his tone indicated his mood precisely. The silences during the play helped to create the tension of his character because of the body language between the characters and the mood of the scene. My overall impression of the play was that it was quite a dark, depressing yet naturalistic idea. The production was very well put together and the communication of ideas were clear within the plot. I found it enjoyable to watch and I particularly liked the second Act where the character of Helena was introduced and the plot thickened up. Although, I did find the final scene quite disappointing, because I had hoped that Alison was a stronger person and would have known better than to go crawling back to Jimmy. However, I thought that the ending was more realistic and more in keeping with Alison's character and the time in which it was set. Sian Goff 11e 1. Page 1 2401 Words 2. ...read more.