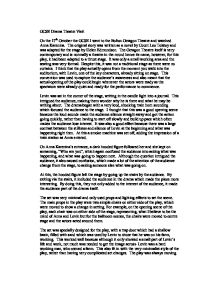 GCSE Drama Theatre Visit On the 17th October the GCSE I went to the Bolton Octagon Theatre and watched Anna Karenina. The original story was written as a novel by Count Leo Tolstoy and was adapted for the stage by Helen Edmundson. The Octagon Theatre itself is very contemporary and is normally a theatre-in-the-round hence its name, however, for this play, it had been adapted to a thrust stage. It was only a small working area and the seating was very formal. Despite this, it was not a traditional stage as there were no curtains. I think that the play actually opens from the moment you walk into the auditorium, with Levin, one of the key characters, already sitting on stage. This convention was used to capture the audience's awareness and also meant that the actual opening of the play could begin whenever the actors were ready as the spectators were already quiet and ready for the performance to commence. Levin was sat in the corner of the stage, writing in the candle light into a journal. This intrigued the audience, making them wonder why he is there and what he may be writing about. ...read more.

She then falls in love with Count Vronsky and ends up pregnant with his baby. The couple then end up running away, leaving the child with his father. Because of the great pressures of Vronsky's job, Anna and Vronaky slowly begin to get frustrated and Anna turns to drugs. At the end, she takes an overdose of Morphine and kills herself. The story of the play itself was simple, but because of the adaptations made to it by Helen Edmundson, it was very difficult to follow. At first, it appears as though Anna and Levin are talking about memories together or are friends. It appears to be a series of flash backs but to the end of the play, you discover that Anna and Levin had never met before that point in the play. This left the audience to decide how they believed Anna and Levin to be associated. My personal view is that Anna and Levin live their lives separately but at the same time they knew each other. Anna was a part of Levin and Levin was a part of Anna. The two characters were opposites, and when they expressed their views and opinions they were very critical upon each other. ...read more.

Due to the fact that the priest was on a higher level than the other actors, it showed his status and religious symbolism- God is above everyone and everything. The costume of the characters was again very simple. Anna only had one costume change during the interval and before this, she wore deep purple traditional dress wear that would have been worn by the upper classes. In the second half, she wore a black dress, which symbolised the worsening of Anna's predicament as she plunged further and further into circumstances which she could not escape from. There was an obvious establishment of class where the upper class women wore dresses and the men wore suites and uniforms and the beggars wore old clothes, which were very simple and monochrome. In all, the dramatic effects produced were very good and the conventions used were effective, however, the play was hard to follow because of this. I think that the play write concentrated too heavily on trying to use drama conventions than making the plot understandable. I think that because of this, the audience could not enjoy the play to its full potential because they had to focus too hard to understand the play, rather than being able to get involved with the characters and empathising with them. ...read more.