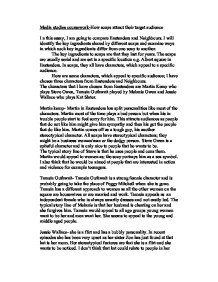 How soaps attract their target audience

Media studies coursework-How soaps attract their target audience I n this essay, I am going to compare Eastenders and Neighbours. I will identify the key ingredients shared by different soaps and examine ways in which such key ingredients differ from one soap to another. The key ingredients to soaps are that they last for years. The soaps are usually serial and are set in a specific location e.g. Albert square in Eastenders. In soaps, they all have characters, which appeal to a specific audience. Here are some characters, which appeal to specific audience; I have chosen three characters from Eastenders and Neighbours. The characters that I have chosen from Eastenders are Martin Kemp who plays Steve Owen, Tamsin Outhwait played by Melanie Owen and Jessie Wallace who plays Kat Slater. Martin kemp- Martin in Eastenders has split personalities like most of the characters. Martin most of the time plays a bad person but when his in trouble people start to feel sorry for him. This attracts audiences as people that do not like him might give him sympathy and then his got the people that do like him. ...read more.

She seems to appeal to the young and middle aged people. Jessie Wallace- she is a flirt and has a bubbly personality. In recent episodes she has been very upset as her sister Zoe has just found at that kat is her mom. Her stereotypical features are that she is a flirt and she wants to be noticed. I don't think that kat could relate to people in her storylines but she relates to them by dealing with the problems that she has. The characters that I have chosen from Neighbours are Susan, Karl and Matt. Karl Head of the Kennedy family, Karl is well respected in Erinsborough as the local doctor. Married to Susan with three kids, Mal, Libby and Billy, family comes first. However, his concern for his loved ones often makes him look over protective and strict. Karl struggled with his life after Susan left to teach in the country and loneliness and confusion led him to his receptionist, Sarah. Almost from the time it began, Karl wanted to put his dalliance behind him and win back his wife. ...read more.

His parents - Evan and Genevieve - despair about his future, but are also proud of his looks and wit. Girls like Matthew, although he lacks the maturity to keep up with most of them. He has a good relationship with Evan, a prickly one with Genevieve and regards his step-mum Maggie as a good mate. Matt would appeal to an audience of young girls they would be attracted to him. Also he may appeal to young guys as he pranks on people and has wit to him. The storyline that I enjoyed most from Eastenders is when little Mo thinks that Trevor was walking around on the streets and tells Charlie. I find this storyline interesting as it is leading from the one were she killed him. It was eagerly anticipated for the return of Trevor and when they showed it was not him, you would still be in suspense. The storyline that I enjoyed in neighbours was the problems in the high school. I enjoyed this as I could relate to it. There was bulling in the soap and there was also teachers trying to sort out the problems. This may appeal to children in secondary schools as this shows what happens in everyday schools. ...read more.