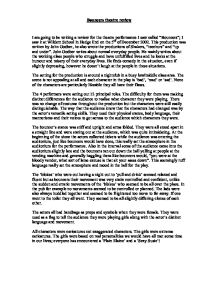 I am going to be writing a review for the theatre performance I saw called &quot;Bouncers&quot;; I saw it at Wildern School in Hedge End on the 5th of December 2002.

I am going to be writing a review for the theatre performance I saw called "Bouncers"; I saw it at Wildern School in Hedge End on the 5th of December 2002. This production was written by John Godber, he also wrote the productions of Shakers, "teechurs" and "up and under". John Godber writes about normal everyday people. He mainly writes about the working class people who struggle and have unfulfilled lives and he looks at the humour and misery of their everyday lives. He finds comedy in the situation, even if slightly depressing, however he doesn't laugh at the people in these situations. The setting for the production is around a nightclub in a busy low/middle class area. The scene is not appealing at all and each character in the play is 'bad', 'mad' or 'sad'. None of the characters are particularly likeable they all have their flaws. The 4 performers were acting out 12 principal roles. The difficulty for them was making distinct differences for the audience to realise what character they were playing. There was no change of costume throughout the production but the characters were still easily distinguishable. ...read more.

All characters were caricatures not exaggerated characters. The girls were extreme caricatures. The girls were based on real personalities we would have all met some time in our lives; everyone has encountered a 'Plain Elaine' and a 'Sexy Susie'! There was one problem with men playing women caricatures. Some people may have seen the actors more as 4 unfeminine men rather than 4 men as women caricatures. I saw them as 4 men as women caricatures so they were successful in convincing me. The actors did this by not pretending to be women instead they pretended to be female caricatures and this exaggeration made the character changeover very obvious to the audience I believe the actors succeeded in changing roles but some morphing was slightly 'flawed'. However there were masses of very effective morphing moments. One moment was when the four lads in the taxi were going home wound down the window to urinate which blew back on them to their dismay, the react to this by standing up and kicking back the chairs they had been sitting on and saying, "look at this mess," suddenly becoming the bouncers again. ...read more.

But bouncers doesn't rely on dialogue, or refer to a location to make it clear to the audience except in the hairdressers. So lighting was a crucial element in the production. SET The music wasn't as important of an element as lighting but some parts would have been cut like the music on the dance floor and Elaine's bag swinging to the beat of the music. There was a lot of music played and relied on. Without the music it wouldn't have been the same show, the slow motion effect would have seemed ridiculous. The play Godber wrote in 1980 isn't the play we saw because there has been a lot added to the production. They have updated a lot of references to keep it current and so an audience watching it would be able to easily relate to the production. There are current issues in the production like Osama bin laden and Goths. The club didn't seem like it was any different to any normal club, the costumes were believable so were the characters, for all I know it could have been a club in Southampton on a Saturday night. Bouncers contained strong language and s****l references which might have been offensive to some. ...read more.