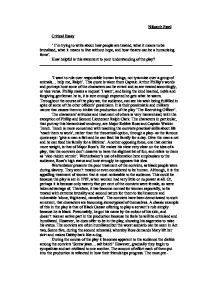 Nilkanth Patel Critical Essay ' I'm trying to write about how people are treated, what it means to be brutalised, what it means to live without hope, and how theatre can be a humanising force'. How helpful is this statement to your understanding of the play? 'I want to rule over responsible human beings, not tyrannise over a group of animals... help me, Ralph'. This quote is taken from Captain Arthur Phillip's words and portrays how some of the characters can be errant and so are treated accordingly, or vice versa. Phillip makes a request 'I want', and being the kind hearted, noble and forgiving gentleman he is, it is sure enough expected he gets what he wants. Throughout the course of the play we, the audience, can see his wish being fulfilled in spite of some of the other officers' pessimism. It is their pessimistic and military nature that causes them to inhibit the production of the play 'The Recruiting Officer'. ...read more.

A classic example of this in the play is that of Black Caesar offering to play a servant's role simply because he is black. Presumably, he got his name by the colour of his skin, and doesn't take an active part in the production because he feels he will be criticised and humiliated. However, he does offer to be in the play, showing his eagerness to raise his status. The convicts are often humiliated but the worst scenario can be seen in Act two, Scene five, during the second rehearsal, whereby Ross demands Mary lift her skirt and makes Dabby bark like a dog. During the course of the play it becomes apparent to the audience the dislike among the convicts 'Screw jaws... salt b***h!' However, gradually they begin to sympathise and act civilised to one another. The amount of effort each of them put into the production is reflected in how their friendships progress. The most pre- Nilkanth Patel eminent change can be seen in Liz's character in Act two, Scene ten. ...read more.

Their hopes that were dashed by the likes of Major Ross have been revived and are now full of aspirations. The production is like a metaphor for the path the convicts took to reveal their true identities, not as 'whores' or 'slaves', but humans living as a part of a community. The articulate manner in which Arscott delivers his speech, at the end of the play, represents his and his fellow convicts' promotion in the hierarchical system. Finally, the audience learn the importance of the title 'Our Country's Good' and the fact that the English migrated to Australia who then begun civilisation. All of these aspects incorporated in the play help us to understand the whole concept of the play. The inspiration the convicts obtained from participating in the play, ensures that the civilisation will spread and more people will learn to appreciate the meritocracy of the theatre. Lieutenant Ralph Clark is enraptured when he realises what he has achieved in these unhopefuls, how he has raised their nobility and transformed them into patriots, as Wisehammer picks up on: 'True patriots all, for be it understood, We left our country for our country's good'. ...read more.