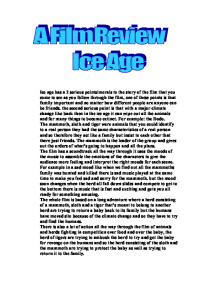 Ice age has a 2 serious points/morals to the story of the film that you come to see as you follow through the film, one of these points is that family important and no matter how different people are anyone can be friends. the second serious point is that with a major climate change like back then in the ice age it can wipe out all the animals and for many things to become extinct. For example: the Dodo. The mammoth, sloth and tiger were animals that you could identify to a real person they had the same characteristics of a real person and so therefore they act like a family but insist to each other that there just friends. The mammoth is the leader of the group and gives out the orders of what's going to happen and all the plans. The film has a soundtrack all the way through it uses the moods of the music to assemble the emotions of the characters to give the audience more feeling and interpret the right moods for each scene. ...read more.

There is also a scene of slow motion with the dodos where there is competition between the dodos and the herd over 3 melons because of the climate change food supplies are low and so all food has to be rationed. With the film in cartoon and a lot of comedy acts there is still a believable point to the story whilst also keeping the audience of small young people amused. There is a lot of evidence shown through the film to support the point it's trying to put across and keep everything still believable. The dialogue is clear and well spoken for the understanding of the age group its aiming at and the audience, the dialogue also includes jokes and a lot of comedy actions through out the film to keep the audience entertained and draw into the film so they don't loose interest, each animal in the film has its own personality and is an individual and it shows this in the film by its use of different dialogues and ways of speech. ...read more.

herd and nearly gets killed, and then the rest of the herd see that he really has changed due to emotionally bonding with them and feeling part of them and see that all he wants is to keep them safe and prevent any harm coming to them and when he sacrifices his own safety to fight off the other tigers the herd see this and therefore there is a twist back to the happy family feeling again. The film has funny climaxes all the way through for example when the baby needs its nappy changingand the animals don't know what to do with it. Also there is a funny scene where the sloth out of pure luck worked out how to make fire and then he gets all big headed about it and his cockeyness gets ahead of him and he sets his own tail on fire. The animals personalitys as friends and in a close herd is what makes the film funny because they all make fun of each other and be horrible about one another to try and out better the other one and its all quite funny to watch. ...read more.