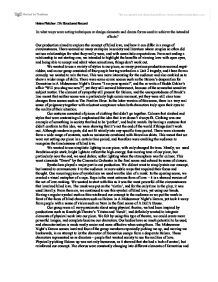 In what ways were acting techniques or design elements and drama forms used to achieve the intended effects?

In what ways were acting techniques or design elements and drama forms used to achieve the intended effects? Our production aimed to explore the concept of blind love, and how it can differ in a range of circumstances. There seemed so many examples in society and literature where couples so often did not see relationships for what they really were, and with unrealistic expectations. From not ending a relationship to not starting one, we intended to highlight the benefits of viewing love with open eyes, and being able to accept and admit when sometimes, things don't work out. We wanted to use a variety of styles in our piece; so many previous productions seemed angst-ridden, and as our group consisted of four people having worked on a Unit 2 tragedy, and three from a comedy, we wanted to mix the two. This was more interesting for the audience and also enabled us to show a wider range of skills. There were some comic scenes such as the Helena's desperation for Demetrius in A Midsummer Night's Dream "I am your spaniel", and the re-write of Hedda Gabler's affair "Will you s**g me now?", yet they still seemed bittersweet, because of the somewhat sensitive subject matter. The element of sympathy still present for Helena, and the unexpectedness of Brack's line meant that neither scene was a particularly high comic moment, yet they were still clear tone changes from scenes such as The Positive Hour. ...read more.

The mask was put on the 'victim', and for the only time in the play, it was used literally. From them on, we continued to use this symbol of blind love, yet using our hands. Having a regular symbol such as this reinforced our concept to the audience as we put the mask in front of the faces of blind characters such as Helena in A Midsummer Night's Dream, yet took it away from people with a sense of vision such as Nora in the final scene of A Doll's House. Our group were all very passionate about using physical theatre; we had been inspired by productions such as Kneehigh Theatre's 'Tristan and Yseult', and definitely wanted to integrate elements of physical work into our piece. We felt by using this type of theatre, we could create more powerful images, and complete become our characters. Our bodies have so much potential to be used, and characterisation is made vastly easier and more effective when using them. The Midsummer Night's Dream scenes involved four of the group members repeatedly picking me up, and moving me backwards, in an attempt to let the character of Demetrius escape from a desperate Helena. These characters represented us as directors - people that wanted society to see the realities of love. ...read more.

Music was used rarely, but appropriately in our production. When music was used, it showed a certain importance to a scene as there were only three pieces of music used. Jose Gonzalez's 'Lovestain' was our opening music, which contained the repeated lyrics "You left a lovestain on my heart, you left a bloodstain on the ground; but blood comes off easily." This communicated the permanence of love, and in particular, of the impact of r**e. This was played alongside the initial r**e metaphor, and its almost hypnotic acoustic guitar picking added a sinister element. This immediately set the tone of the scene, and created tension for the audience. Audience feedback supported the effectiveness of this particular piece of music. Similarly, in the closing scene of our performance, 'Dawn' by the Cinematic Orchestra was used. The tone of this music was far calmer, and had a sense of acceptance and closure to it. It was used as a background for the closing lines of Shakespeare's Sonnet 148 which had some of the most important lines in terms of the overall concept "O me, what eyes hath Love put in my head, Which have no correspondence with true sight!" It seemed to make the lines more powerful, and bring the performance to a natural close. Helen Fletcher 13A Structured Record ...read more.