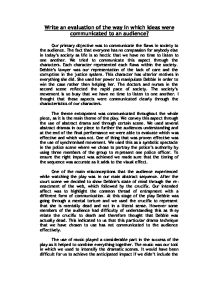 Our primary objective was to communicate the flaws in society to the audience. The fact that everyone has no compassion for anybody else in today's society as life is so hectic that we have no time to listen to one another

Write an evaluation of the way in which ideas were communicated to an audience? Our primary objective was to communicate the flaws in society to the audience. The fact that everyone has no compassion for anybody else in today's society as life is so hectic that we have no time to listen to one another. We tried to communicate this aspect through the characters. Each character represented each flaws within the society. Debbie's lawyer was our representation of the lack of care and the corruption in the justice system. This character has ulterior motives in everything she did. She used her power to manipulate Debbie in order to win the case rather then helping her. The doctors and nurses in the second scene reflected the rapid pace of society. The society's movement is so busy that we have no time to listen to one another. I thought that these aspects were communicated clearly through the characteristics of our characters. The theme entrapment was communicated throughout the whole piece, as it is the main theme of the play. We convey this aspect through the use of abstract drama and through certain scene. ...read more.

However some members of the audience had difficulty of understanding this as they relate the crucifix to death and therefore thought that Debbie was actually dead. This indicated to us that this particular drama technique that we have chosen to use has not communicated to the audience effectively. The use of music played a considerable part in the success of the play as it helped to combine everything together. The music was our tool in which we used to intensify the dramatic scenes. It would have been difficult for us to achieve the anticipated impact if we didn't include the music because the songs that were used were chosen to either aid in building tensions or helped with the emotional effect we wanted the audience to have. The music also helped to carry the emotion in one scene to the other, which made the play flowed more smoothly. While devising the piece we were indecisive to whether we should include the flash backs because it has to be taken onboard properly in order for it to look professional. In the end it was clear that we have to include the flash backs in order to show Debbie's loneliness. ...read more.

The shooting scene included a lot of movements, we realised that it would be hard for the audience to fully understand what is going due to the fact the two things are happening at the same time in two ends of the stage. We decided to act the whole climax in a slow motion so each reaction can be shown clearer. I also made sure that I enlarge my gesture so that the audience grasp that I have been shot instead of Lucy. We also added another aspect to ensure that the plot was being communicated effectively. I did a solo acting, where I pretended that the police was arresting me. This has to be added so that the audience understand the court scene that would follow is a result of a misunderstanding, as the police believe that I killed Officer Kent. During my solo acting I had to ensure that I transferred all the things that the audience might have found difficult to understand into words. For instance I had to say that I didn't shoot officer Kent and that I was shot as a mistake when Officer Kent tried to fire back at Lucy. This had to be added so that the plot was communicated clearly and also to outline the climax more effectively. ...read more.