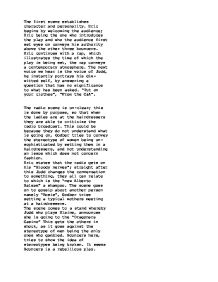 Overall, Bouncers In my opinion is about four lads and four ladies getting ready for a night out, and in the end, it was all a waste of time.

The first scene establishes character and personality. Eric begins by welcoming the audience; Eric being the one who introduces the play and who the audience first set eyes on conveys his authority above the other three bouncers. Eric continues with a rap, which illustrates the time of which the play is being set, the rap conveys a contemporary atmosphere. The next voice we hear is the voice of Judd, he instantly portrays his dim-witted self, by answering a question that has no significance to what has been asked. "Put on your clothes", "From the C&A". The radio scene is un-clear; this is done by purpose, so that when the ladies are at the hairdressers they are able to criticize the radio broadcast. This could be because they do not understand what is going on, Godber tries to convey the stereotype of women being un-sophisticated by setting them in a hairdressers, and not understanding an issue which does not concern fashion. Eric states that the radio gets on his "Bloody nerves"; straight after this Judd changes the conversation to something, they all can relate to which is the "new Alberto Balsam" a shampoo. ...read more.

The check is something, which is not usually shown by the media in anyway; therefore, Godber is letting us see behind the scenes. Both the Barbers and Hairdressers scene are present to show the audience contrast in men and women getting ready for a night out. We are now shown the women at the disco wearing "brand new clothes" they begin by introducing themselves by telling us their name and their personality; for example, Eric who is played by Maureen is described as "massive but nice, fat but cuddly. Not a bag, but likes a drink and a laugh. A bit busty". In this scene, Godber as he did with the lads, discusses matters that women converse about in everyday life; for example, Les introduces the matter of "Weight". Outside the club, we are accompanied with Eric and Judd playing the Bouncers and Ralph and Les playing a variety of characters trying to enter the club. In this scene, Godber shows the kind of prejudice present in society of this time whereby if you are pretty women, anything is possible but if you are a man, you need some sort of special status to be allowed entrance to a club for example. ...read more.

Godber shows the audience that Eric being older and seeing what is happening and not joining in is wise, therefore his advice to the girl is sensible. It seems the message is to the teenagers reading Bouncers, saying how elders have the maturity and sense to see what is going on and there help should not be ignored or else the consequences faced will be their own doing. When the bouncers are outside the club, they discuss "a woman...being employed in a Manchester club" to be a bouncer. This immediately brings shock to Judd; he expresses his horror through his vile words "Bollocks". Ralph reacts to this by saying, "pull another one", this shows that this concept is not normal and therefore it is hard for them to believe. At the club, there is friction between Judd and Les, this causes a riot. Godber exploring male behaviour towards women always ending in mayhem introduces violence. Overall, Bouncers In my opinion is about four lads and four ladies getting ready for a night out, and in the end, it was all a waste of time. The play ends with a rap, which frankly says to the lads, and ladies "go home...there is nowhere else to roam...ITS ALL OVER". ...read more.