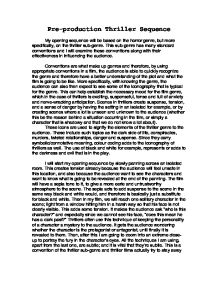 Pre-production Thriller Sequence My opening sequence will be based on the horror genre, but more specifically, on the thriller sub-genre. This sub-genre has many standard conventions and I will examine these conventions along with their effectiveness in influencing the audience. Conventions are what make up genres and therefore, by using appropriate conventions in a film, the audience is able to quickly recognize the genre and therefore have a better understanding of the plot and what the film is going to be like. More specifically, with knowing the genre, the audience can also then expect to see some of the iconography that is typical for the genre. This can help establish the necessary mood for the film genre, which in the case of thrillers is exciting, suspenseful, tense and full of anxiety and nerve-wracking anticipation. Scenes in thrillers create suspense, tension, and a sense of danger by having the setting in an isolated for example, or by creating scenes where a lot is unseen and unknown to the audience (whether this be the reason behind a situation occurring in the film, or simply a character that is shadowy and that we do not know a lot about). These icons are used to signify the elements of the thriller genre to the audience. These include such topics as the dark side of life, conspiracies, murders, twisted relationships, danger and suspense. ...read more.

The opening sequence of my thriller will try to create a sense of uneasiness for the audience. This is what I am planning to do, and it breaks the mold of Todorov's narrative model: equilibrium-disequilibrium (a problem arises and it is often complicated even further)-equilibrium again (problem resolved). In my case, the format will be: disequilibrium-extended disequilibrium-equilibrium. This is because the thriller will start off quite heavily suspenseful and then it will continue to be tense, but a plot twist will occur so that the disequilibrium is now being caused for a completely different reason than it was originally. Then finally at the end the whole situation/mystery is solved. This format means that the film will actually appeal to both men and women, if considering Rowland Barthes' theory of codes of action and codes of enigma. Codes of action have complete and closed endings to them, which is male narrative, and codes of enigma are open endings, which is female narrative. Therefore, we assume that the men wouldn't like being kept at the edge of their seats the whole time, due to all the cliff-hangers and suspense; but since the film will end in a very finalised way, it can be watched by both genders. Certain technical codes are used in thrillers to enhance the necessary feelings for the scenes. ...read more.

I want it this way because it will allow my movie to keep it's essence of being artistic, but I will also still have a slightly higher budget for stunts and special effects so that it won't look completely like a B-grade horror movie. This does require a higher budget than a completely independent label would, but I'm hoping that success of the film will be greater because of this in the long run. My film will hopefully reach a large audience, and I am aiming for my film to have a large target demographic. The film, as stated before, is appropriate for both males and females since both types of narratives are included. My film will not be aimed at teenagers like a lot of horror-type films are, but instead it will be more sophisticated as a thriller, and therefore will appeal to a slightly older audience of about a 20-35 age range. Also, on a final note, because it is the convention for men to always play the murderers or shady characters in thrillers and for women to be the caring ones, I have decided to turn this around this in my film. The psychotic individual will actually be played by a woman and the good character by a man. This hopefully will give some incentive for people to go watch the film! This is what will set my film apart from all other thrillers and is what will make it stand out in people's minds. ...read more.