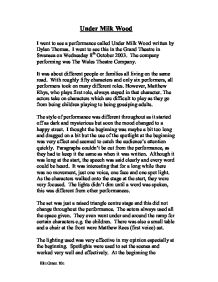 Under Milk Wood I went to see a performance called Under Milk Wood written by Dylan Thomas. I went to see this in the Grand Theatre in Swansea on Wednesday 8th October 2003. The company performing was The Wales Theatre Company. It was about different people or families all living on the same road. With roughly fifty characters and only six performers, all performers took on many different roles. However, Matthew Rhys, who plays first role, always stayed in that character. The actors take on characters which are difficult to play as they go from being children playing to being gossiping adults. The style of performance was different throughout as it started off as dark and mysterious but soon the mood changed to a happy street. I thought the beginning was maybe a bit too long and dragged on a bit but the use of the spotlight at the beginning was very effect and seemed to catch the audience's attention quickly. Paragraphs couldn't be cut from the performance, as they had to keep it the same as when it was written. ...read more.

Women wore full, a lined skirts, all slightly different. Both men and women were dressed simply to fit all characters. I thought the overall design worked well together. Simple set, simple costumes and limited music. Although the performance appeared to be very basic and simple the standard of the acting kept the audiences attention and was very impressive. It was clear that the performers were very professional. Music was only used occasionally. However there was a lot of use of singing in the second half. When they were singing there was no music behind the voices. One of the performers was Llinos Daniel. I thought she was very good with performing each character. She was very focused and never lost concentration. I was particularly impressed that she worked well in being in character for both a young child and an old woman. She was well cast in my opinion because she seemed to be able to take on any role with ease. ...read more.

However, they showed off their skills as they proved they could perform as almost any role given. They had the mannerisms spot on as young children and they made the play funny by doing this. The part where the boys had to kiss the girls or pay a penny was done well and was obviously well rehearsed. My least favourite part was the beginning because I think it went on for a bit too long and maybe lost the audiences attention. This could be because of the way in which the play was written and couldn't be changed or maybe because there was no movement at all which is why people lost interest perhaps. Although I found this particular bit my least favourite I still think that the use of lighting focused on the Matthew Rhys's face worked very effectively. This bit could have been improved by some movement or music. In my opinion the performance was extremely good but the way it was written was a bit hard to follow and slightly confusing. Elin Green 10n ...read more.