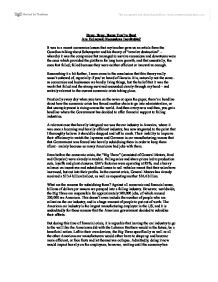 It was in a recent economics lesson that my teacher gave us an article from the Guardian talking about Schumpeter and his theory of “creative destruction” – whereby it was the companies that managed to survive recessions and downturns were the ones which provided the platform for long term growth, and that essentially, the ones that failed; failed because they were neither efficient or innovative enough.

Researching it a bit further, I soon came to the conclusion that this theory really wasn’t unheard of, especially if you’ve heard of Darwin. It is, naturally not the same - as economies and businesses are hardly living things, but the belief that it was the weak that failed and the strong survived resounded clearly through my head – and entirely relevant to the current economic crisis taking place.

Practically every day when you turn on the news or open the paper, there’s a headline about how the economic crisis has forced another chain to go into administration, or that unemployment is rising across the world. And then every now and then, you get a headline where the Government has decided to offer financial support to failing industries.

A relevant case that heavily intrigued me was the car industry in America, where it was once a booming and heavily efficient industry, has now stagnated to the point that I thoroughly believe it should be dropped and left to crash. Their inability to improve their efficiency to match the Japanese and Germans in car manufacturing; means that that Government was forced into heavily subsidising them in order to keep them afloat - mainly because so many Americans had jobs with them.

Even before the economic crisis, the “Big Three” (consisted of General Motors, Ford and Chrysler) were already in trouble. Falling sales and share prices led to production cuts, layoffs and plant closures. GM’s factories were operating at 85%, and a heavy reliance on incentives and subsidized leases to sell vehicles meant that their sales have increased, but cut into their profits. In the current crisis, General Motors has already received a $13.4 billion bailout, as well as requesting another $16.6 billion.

What are the reasons for subsidising them? Against all economic and financial sense, billions of dollars per annum are pumped into a failing industry. However, worldwide, the Big Three are responsible for approximately 500,000 jobs, of which around 200,000 are American. This doesn’t even include the number of people who are reliant on the car industry, and is a huge amount of people to put out of work. The American car industry is the largest manufacturing employer in the US, and it is undoubtedly for these reasons that the American government decided to subsidise their efforts.

But during this time of financial crisis, it is arguable that leaving the car industry to go to the wall like the Americans did with the Lehman Brothers would in the future, be a beneficial action. Left to their own devices, the Big Three specifically as well as all the other American car manufacturers would either have to shape up and become more efficient, or face facts and let themselves collapse. Admittedly, doing it now would impact heavily on the employees, however, waiting until the economy has recovered and then hitting it with a bombshell like this would potentially precipitate another economic crisis as workers scrabble for jobs and hundreds of thousands are put out of work. If it continues like it has for the past several decades, then sooner or later the car industry will reach a crisis point, where the government can no longer afford to subsidise it, and that it’s so far behind its competition from Germany and Japan that it cannot match or overtake. The needs of the few, or the needs of the many and the future?

Letting companies rise and fall as dictated by the needs of the market and not the people will nearly always ultimately lead to a stronger economy. Given the exception of practices such as monopolies and cartels which possess a huge majority of the market, stifling any competition at all; the economy will be one that is based on strong foundations. Supporting and subsidising companies that are weak leads to a weak market.

So can this theory be applied to the banks such as Northern Rock and RBS? Obviously, the banking industry is completely different to the manufacturing of cars – but is it important enough that we can’t afford to let it collapse, causing an immediate “depression” but ultimately, laying the grounds for a stronger economy?

And furthermore, if enough creative destruction took place, and formed an economy that was 100% efficient, with regulation from the Government to ensure that all practices used by companies and businesses would prevent a recession from taking place – would a recession then be inevitable?

Natural selection is a state of ever changing evolution, in order to adapt to new environments. Creative destruction and economies however, are not. I would argue that economies work the same everywhere you go: buying, selling, loans, how people react, and a whole myriad of other things. Once enough knowledge and technology has been gathered that all things are then predictable, then yes, recessions will avoidable.

One major reason for this is governments, which are constantly changing. In the UK, governments technically change every 5 years, and while sometimes the same Prime Minister is re-elected, eventually a new one will be ushered in, who will have a different style and approach to tackling economic management and control. The theory of “if it isn’t broke, don’t fix it” doesn’t apply to politicians who are always seeking to gain an advantage over their opponent by claiming they know better on how to run the country.

Another large factor in why recessions are inevitable is the reliance on other countries for our own economy. This is due to globalisation, and as technology advances and third-world countries develop, it means that all countries gradually become even more connected and interlinked with each other. As one country goes into recession, it affects the countries associated with it in terms of trading etc, and it has a knock-on effect. For example, this current crisis started in America and has spread across the world. Combine it with the theory of constant boom and bust, and then it becomes easier to understand as to why recessions are unavoidable.

Methods such as monetary and fiscal policy can help to steady out the trend growth of an economy, reducing the chance of a recession by addressing some of the causes of a recession, and by use of regulation ensuring that companies are not using bad practices such as taking on “bad debt”. But all of this counts for nothing if the fundamentals of the economy are frail. Measures such as training schemes to help the unemployed help to shorten the length of recessions but merely serve only to address the effects of a recession.

In conclusion, it’s clear that recessions are inevitable; there’s no doubt about it. However, steps can definitely be taken to ensure that it is at least delayed, or that when it does take place, it’s effects are dampened. The theory of creative destruction is one of many tools that can be used to strengthen the foundations of an economy, but is also the strongest one available.