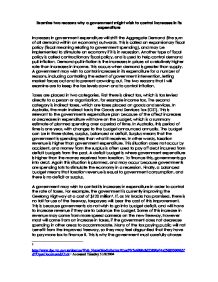 To finance this, governments go into debt. Again this situation is planned, and may occur because governments are spending lots to stimulate the economy in a recession. Finally, a balanced budget means that taxation revenue is equal to government consumption, and there is no deficit or surplus. A government may wish to control its increases in expenditure in order to control the rate of taxes. For example, the government is currently improving the Geelong Highway at a cost of $120 million1. If, as Mr Bracks has promised, there is no toll for use of the freeway, taxpayers will bear the cost of this improvement. This is because governments do not wish to go into budget deficit, and will have to increase revenue if they are to balance the budget. Some of this increase in revenue may come from more speed cameras on the new freeway, however most will come from an increase in taxes, if the government does not decrease spending in other areas to accommodate. ...read more.

All else equal, government expenditure will increase Aggregate Demand, which will then increase inflation. This situation can be seen in the diagram below, when the economy is operating at an intermediate range, as Keynesian economists argue it usually does. The diagram shows that an increase in AD from AD to AD1, caused in this case by an increase in government spending, will lead to an increase in the general level of prices from point y to x. It is therefore clear that a government will not want to increase expenditure if it wishes to control inflation. Indeed, a government may wish to implement a contractionary fiscal policy, where they decrease expenditure and tend towards a budget surplus. This will decrease the rate of inflation back to manageable levels and also create surplus money which can be used to pay off past debt, as explained above. In conclusion a government may wish to control its spending for a variety of reasons, including controlling tax rates by manipulating the budget and controlling inflation by deflating aggregate demand. 1 http://www.dpc.vic.gov.au/domino/Web_Notes/MediaRelArc02.nsf/0/5a60b8c8d23890e74a25689300063fdf?OpenDocument&Click= Accessed Tuesday 31/8/2004 2 http://quote.bloomberg.com/apps/news?pid=10000080&sid=aExLNFVCBExs&refer=asia accessed 31/4/2004 ...read more.

This essay has a clear answer, looking at why the government is controlling its spending. I think the crux of this question lies in the "increases in government spending". This essay identifies this, and these is some discussion of spending ...

This essay has a clear answer, looking at why the government is controlling its spending. I think the crux of this question lies in the "increases in government spending". This essay identifies this, and these is some discussion of spending growing too quickly, causing a budget deficit and other relevant points. It is key not to deviate from the question, as it's easy to assume this is simply wanting a discussion of what effects government spending can have on the economy. It was good to see that one of the two reasons was controlling inflation, but I would've made the second reason more explicit in maintaining a budget surplus or a low budget deficit, rather than keep taxes down.

The analysis here is good. I liked how key concepts were defined instead of simply used. For example "Surplus means that the government is spending less than what it receives" shows a good understanding. To improve this definition, I would've included "what it receives in tax revenue" to show the examiner you are differentiating from any other types of inflow. To take this answer to the next level, there needs to be a discussion of the importance of budget deficits and how they are detrimental to an economy. This is very topical, and it would be easy to draw upon the huge debt levels of Greece and what this has done for their international status. At A-Level, it's not good enough to say governments want to keep a budget surplus without stating why. The diagrammatical analysis for inflation is strong, with the Keynesian long-run average supply curve making a clear example of demand-pull inflation. Although simple, I particularly like the sentence "The diagram shows that an increase in AD from AD to AD1, caused in this case by an increase in government spending, will lead to an increase in the general level of prices from point y to x" as it shows the skills necessary to interpret the diagram, thus showing understanding. Once again, I think there needs to be a discussion of why keeping inflation stable becomes important to an economy.

The structure here is fine. There is a clear introduction and conclusion. However, some of the introduction is unnecessary. For example "I will examine" is not a sophisticated way to write at A-Level. It's much better to say "Two main reasons are" and not use the first person. The conclusion adds nothing to the argument, whereas this is the perfect place to add a last judgement or perceptive point. Ending on a strong note is often where the final marks for an essay are allocated, and sentences such as "the extent to which governments must control increases in their spending depends upon" will gain the top marks. Spelling, punctuation and grammar are fine.