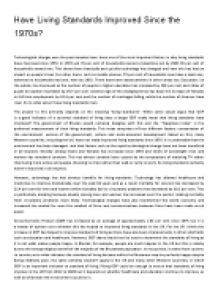 Have Living Standards Improved Since the 1970s?

﻿Have Living Standards Improved Since the 1970s? Technological changes over the past decades have been one of the most important factors in why living standards have improved since 1970. In 1970 just 35 per cent of households owned a telephone but by 2006 92 per cent of households owned one. This shows how drastically and quickly technology has changed and how this has had an impact on people's lives. For other items, such as mobile phones, 79 per cent of households now have a least one, whereas no households had one, even by 1981. There have been advancements in other areas too. Education, on the whole, has improved as the number of people in higher education has increased by 302 per cent and ratios of pupils to teachers has fallen by 24.7 per cent. ...read more.

Based on this, many Western countries, including the UK, have not really improved living standards since 1970. It is undeniable that the environment has been damaged and that factors such as the rapid technological change have not been beneficial in all respects. Obesity among males and females has increased since 1993 and levels of overweight men and women has remained constant. This has almost certainly been caused by the temptations of watching TV rather than being more active and people choosing to drive rather than walk or cycle to work. So living standards certainly haven't improved in all respects. However, technology has had obvious benefits for living standards. Technology has allowed healthcare and medicines to improve dramatically over the past 40 years and as a result mortality for cancers has decreased by 21.4 per cent for men and women while mortality due to circulatory problems has decreased by 60.2 per cent. ...read more.

However, GDP alone should not be used to determine the standards of living as it is not what makes people happy. In Bhutan, for example, people are much happier in the UK but this is mainly due to the strong religious beliefs of the majority of the Bhutanese population. In my opinion, it varies from country to country as to what indicates the standard of living because while the Bhutanese may be perfectly happy despite being relatively poor, the same certainly wouldn't apply to the UK and many other Western countries, in which GDP is an important indicator to standard of living. Rising GDP could be enough to ensure that standards of living improve in the UK from 2012 to 2020 but it depends on whether healthcare and education continue to improve, as well as what state the environment could be in. ...read more.