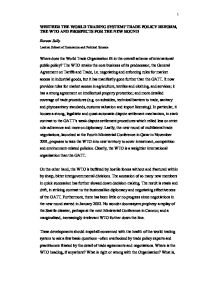 Where does the World Trade Organisation fit in the overall scheme of international public policy?

WHITHER THE WORLD TRADING SYSTEM? TRADE POLICY REFORM, THE WTO AND PROSPECTS FOR THE NEW ROUND Razeen Sally London School of Economics and Political Science Where does the World Trade Organisation fit in the overall scheme of international public policy? The WTO retains the core business of its predecessor, the General Agreement on Tariffs and Trade, i.e. negotiating and enforcing rules for market access in industrial goods, but it has manifestly gone further than the GATT. It now provides rules for market access in agriculture, textiles and clothing, and services; it has a strong agreement on intellectual property protection; and more detailed coverage of trade procedures (e.g. on subsidies, technical barriers to trade, sanitary and phytosanitary standards, customs valuation and import licensing). In particular, it houses a strong, legalistic and quasi-automatic dispute settlement mechanism, in stark contrast to the GATT's weak dispute settlement procedures which relied less on strict rule-adherence and more on diplomacy. Lastly, the new round of multilateral trade negotiations, launched at the Fourth Ministerial Conference in Qatar in November 2001, proposes to take the WTO into new territory to cover investment, competition and environment-related policies. Clearly, the WTO is a weightier international organisation than the GATT. On the other hand, the WTO is buffeted by hostile forces without and fractured within by sharp, bitter intergovernmental divisions. The accession of so many new members in quick succession has further slowed down decision-making. The result is stasis and drift, in striking contrast to the businesslike diplomacy and negotiating effectiveness of the GATT. Furthermore, there has been little or no progress since negotiations in the new round started in January 2002. No wonder doomsayers prophesy a replay of the Seattle disaster, perhaps at the next Ministerial Conference in Cancun; and a marginalised, increasingly irrelevant WTO further down the line. These developments should impel all concerned with the health of the world trading system to ask a few basic questions -often overlooked by trade policy experts and practitioners fixated by the detail of trade agreements and negotiations. ...read more.

If the WTO disregarded these regulatory barriers, lower protection at the border would be nullified by higher protection behind it. This means the WTO has to tackle standards relating to production and processing methods that lie deep in the structure of the domestic economy, in addition to tackling remaining (and substantial) border barriers. Negative (proscriptive) rules continue to be crucially important; but the WTO needs to have some positive (prescriptive) procedural disciplines to make domestic trade-related policies more transparent. Otherwise market access would not be a reality. This is the original intention behind the WTO's agreements on subsidies, services, sanitary standards, technical barriers to trade, customs valuation and import licensing. Nevertheless, WTO members should proceed very gingerly on the domestic regulatory front. In some cases, this approach hinders market access (TRIPS), or at least provides a GATT-legal floor for existing and future regulatory protection (anti-dumping). In other cases, WTO agreements with domestic regulatory content (e.g. GATS, SPS, TBT) could hold back a surge of non-border protection. However, even on the latter front one should be very sensitive to constraints in developing countries -- especially the least developed among them -- with scarce administrative, technical and financial resources to implement high-quality international standards. There is a tendency for international standards, such as the Codex Alimentarius on food safety, to be driven by developed country benchmarks and political agendas, taking little account of differences in national circumstances and capacities in the developing world. Viewed more cynically, organised interests in rich countries push for legally complex, costly and rigid standards in the WTO, enforceable through dispute settlement, in order to realise their protectionist aims. This is precisely the backdoor intrusionism feared by Bhagwati. To cut a long story short, there are limits to a one-size-fits-all approach to regulatory issues in the WTO, which is in serious danger of regulatory overload. The Organisation risks neglecting its core purpose of furnishing reasonably simple negative rules to secure and extend market access as it moves into "trade plus" issues involving domestic regulation. ...read more.

animal or plant life or health, but existing GATT rules, and especially the SPS Agreement, insist that these measures should be based on scientific evidence and should not constitute disguised restrictions on trade. The EU, however, takes a much more conservative view of risk assessment than other WTO members, especially where food safety standards are concerned. The EU stance on precaution is much less based on what existing scientific evidence would consider as "acceptable" risk, and wishes to take consumer and other views into account. Hence its strong preference to "clarify" relevant SPS provisions (especially the preamble, and Articles 3.3&5.7 of the agreement). Other WTO members consider this position to be an open invitation to restrict imports on all sorts of spurious grounds. It is nevertheless a politically sensitive and high-order issue for the EU, so it would not be surprising if it tried to introduce it by stealth into the new round. At first glance, the wording on trade and environment in the Work Programme of the Ministerial Declaration is sufficiently tight to prevent EU skulduggery. It refers to the "effect of environmental measures on market access" (my italics), not the other way around. And it adds that the outcome of work and negotiations "shall not add to or diminish the rights and obligations of Members under existing WTO agreements, in particular the Agreement on the Application of Sanitary and Phytosanitary Measures, nor alter the balance of these rights and obligations, and will take into account the needs of developing and least developed countries".118 Nevertheless, the preambular references to the environment, and the non-trade concerns taken into account in the agricultural negotiations,119 provide the EU with worrying wiggle-room. Hence the need for other WTO members to be alert and cautious in this part of the new round. Miscellaneous issues The Work Programme on electronic commerce, which has achieved very little, will continue, as will the current practice of not imposing customs duties on electronic transmissions. This will be reviewed at the Mexico Ministerial. ...read more.