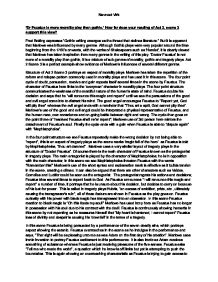 Dr Faustus is more morality play than gothic. How far does your reading of Act 2, scene 3 support this view?

'Dr Faustus is more morality play than gothic.' How far does your reading of Act 2, scene 3 support this view? Fred Botting expresses "Gothic writing emerges as the thread that defines literature." But it is apparent that Marlowe was influenced by many genres. Although Gothic plays were very popular around the time beginning from the 1760's onwards, with the works of Shakespeare such as 'Hamlet', it is clearly viewed that Marlowe has taken inspiration from many genres in the writing of this play. 'Doctor Faustus' is not more of a morality play than gothic, it is a mixture of sub genres of morality, gothic and tragedy plays. Act 2 Scene 3 is a perfect example show evidence of Marlowe's influences of several different genres. Structure of Act 2 Scene 3 portrays an aspect of morality plays. Marlowe has taken the repetition of the reform and relapse pattern commonly used in morality plays and has used it in this scene. ...read more.

Marlowe's use of the short syntax and exclamation mark is effective as it builds tension in the scene, creating a climax. It can also be argued that there are other characters such as Valdes, Cornelius and Lucifer could be seen as the antagonist. The protagonist regrets his actions and decisions; Faustus tries several times to repent back to God. As Faustus announces "I will renounce this magic and repent" a number of time, it portrays that he is unsure about his decision, but decides to carry on because of his l**t for power. This is called in tragedy plays Hubris, "an excess of ambition, pride, etc., ultimately causing the transgressor's ruin", all of these feature are shown in Faustus as the play goes on. Faustus curiosity with his power with black magic has transgressed into an obsession. In this scene Faustus reaction to black magic is "Oh this feeds my soul!" Marlowe has used irony here as Faustus has no longer in possession with his soul due to his contract with the devil. ...read more.

This reaction to Lucifer entering shows how intimidating and overpowering the character is. In some performances the scene has been directed to have Faustus to be seated on a throne next to Lucifer, this interpretation shows Faustus to have fully transgressed to the side of the satanic. Transgression is a key aspect of the Gothic. As the play ends with Faustus dying and been drag down to h**l it contrast to the ending with morality plays where the character is resolve at the end. The gothic is all about breaking the boundaries, and Marlowe has done this with this play, as it is not conventional play and it deals with issues and themes of the devil and divinity which were very much controversial themes to explore for a play to be shown the general public. His play is used to explore and transgress the public to talk about these subjects, there for if the play would had to be put in a category I would agree that it would be placed in the Gothic genre. ?? ?? ?? ?? Navneet Virk ...read more.