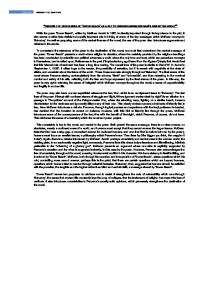 "DISCUSS THE USEFULNESS OF 'DOVER BEACH' AS A KEY TO UNDERSTANDING MCEWAN'S AIMS IN 'SATURDAY'" While the poem 'Dover Beach', written by Matthew Arnold in 1867, is directly important through its importance to the plot, it also serves a rather less visible but equally important role in hinting at some of the key messages which McEwan conveys in 'Saturday'. As well as proposing some of the central themes of the novel, the use of the poem also introduces arguments and debates to the reader. To understand the relevance of the poem to the destination of the novel, one must first understand the central message of the poem: 'Dover Beach' presents a world where religion is obsolete, where the certainty provided by the religious teachings has been overhauled by scientific and political advances; a world where the only love and trust, which are precarious concepts in themselves, can be relied upon. ...read more.

The poem may also have a more superficial relevance the Iraq War, which is an omnipresent issue in 'Saturday'. The last lines of the poem ("Swept with confused alarms of struggle and flight,/Where ignorant armies clash by night") is an allusion to a passage in Thucydides' account of the Peloponnesian War, where the attacking army, fighting on a similar beach, became disorientated by the darkness and ignorantly killed many of their own. This clearly evokes numerous incidents of friendly fire in Iraq. Here McEwan introduces a debate: Perowne, through logical process and experience with the Iraqi professor he treated, has decided that the invasion is correct on balance; however, with this hint at friendly fire through the poem, McEwan introduces some of the consequences of the Iraq War with the benefit of hindsight, which Perowne, of course, did not have. ...read more.

However, Perowne also acknowledges the fear of uncertainty throughout the novel, meaning fundamental conflict in his character: this inconsistency in itself is fitting, and is echoed by 'Dover Beach'. McEwan, both through his narrative and incorporation of 'Dover Beach', raises questions which his cold, controlling muse cannot answer: perhaps this is the point, that there are certain questions which are beyond humans, questions which humans tried to resolve through celestial fantasies. 'Saturday', then, suggests that humans should be satisfied with the provable, the tangible and the logical rather than blind and archaic faith, a message shared by 'Dover Beach'. 'Dover Beach' serves two purposes: to reinforce and to resist. It strengthens the note of vulnerability which runs through 'Saturday', the sense that modern life constantly lays the cusp of collapse, that the irrelevance of religion has meant the loss of certitude. It also introduces uncertainties to Perowne's usually solid opinions, which perversely strengthens the destination of the novel. ?? ?? ?? ?? ...read more.