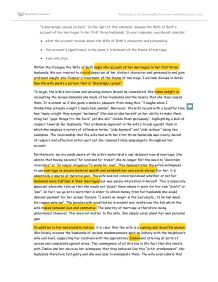 &quot;A shockingly cynical picture&quot;. In the light of this comment, discuss the Wife of Bath's account of her marriages to her first three husbands. In your response, you should consider:

"A shockingly cynical picture". In the light of this comment, discuss the Wife of Bath's account of her marriages to her first three husbands. In your response, you should consider: * what the account reveals about the Wife of Bath's character and personality * the account's significance in the poem's treatment of the theme of marriage * tone and style Within the Prologue the Wife of Bath leaps into account of her marriages to her first three husbands. We are treated to a vivid depiction of her distinct character and personality and gain profound insight into Chaucer's treatment of the theme of marriage. I will now discuss in detail how the wife paints a picture that is "shockingly cynical". To begin, the wife's merciless and uncaring nature should be considered. She takes delight in recounting the s****l demands she made of her husbands and the misery that she thus caused them. It is almost as if she gains a s******c pleasure from doing this: "I laughe whan I thinke/How pitously a-night I made hem swinke". ...read more.

The wife was not concerned about whether or not her husbands were fulfilled in their marriages but was purely interested in herself. This is especially apparent when she tells us that she would not "plese" them unless it were for her own "profit" or "ese". In fact, we go on to learn that in order to obtain money from her husbands she would demand payment for her s****l favours: "I wolde no lenger in the bed abyde....til he had maad his rauson unto me". The parallel with prostitution is evident and reinforces the link which the wife makes between love and commerce. The sanctity of marriage is therefore being undermined. However, this does not matter to the wife. She simply cares about her own personal gain. In addition to her materialistic nature, it is clear that the wife is a cunning and deceitful woman. She falsely accuses the husbands of various misdemeanours such as lechery with the neighbour's wife and maid, suspecting her relations with the apprentince Jankin and uttering all sorts of curses and complaints against wives. ...read more.

This can be seen in the animal imagery prevalent in the poem. The wife likens herself to a male horse that could "bite and whine" in order to reinforce her masculine, aggressive qualities. She is by no means the typical subdued and obedient wife one would expect to find in fourteenth century England. On the other hand, the wife told her husband that he should be like their sheep Wilkin, "pacient and meek". Thus, the wife reverses the traditional viewpoint of man and wife. She wanted to possess "sovereinetee" in her relationships and to make her husbands subdued and placid. All of this shows that marriage did not thwart her independence in the past and that she is determined to keep it that way. On the whole, we can see that the account offered by the Wife of Bath illustrates a shockingly cynical view of her marriages. She is a bold and independent character, atypical of a medieval housewife, who displays a cold and totally self-interested attitude towards her husbands. In essence, she shocks but at the same intrigues us. ...read more.

The strengths of this essay lie in its clarity of structure and expression, its effective use of relevant, brief and well-integrated quotation and its persuasive tone.
The essay could be improved by recognising that the concept of marriage has changed, and by questioning the premise that Chaucer offers us a 'shockingly cynical picture', rather than just accepting that this is the case. In addition, the writer mainly tackles only the first bullet point of the question.
****