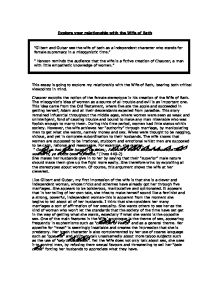 Explore your relationship with the wife of bath

Explore your relationship with the Wife of Bath "Gilbert and Gubar see the wife of bath as a independent character who stands for female supremacy in a misogynistic time." " Hanson reminds the audience that the wife is a fictive creation of Chaucer, a man with little empathetic knowledge of women." This essay is going to explore my relationship with the Wife of Bath, bearing both critical viewpoints in mind. Chaucer exploits the notion of the female stereotype in his creation of the Wife of Bath. The misogynist's idea of women as a source of all trouble and evil is an important one. This idea came from the Old Testament, where Eve ate the apple and succeeded in getting herself, Adam and all their descendants expelled from paradise. This story remained influential throughout the middle ages, where women were seen as weak and unintelligent, fond of causing trouble and bound to make any man miserable who was foolish enough to marry them. During this time period, women had little status within society. However, the wife achieves her "authority" through marriage, by manipulating men to get what she wants, namely money and s*x. Wives were thought to be nagging, vicious, and yet in complete subordination to their husbands. The wife knows that women are supposed to be irrational, stubborn and emotional whilst men are supposed to be calm, rational and reasonable. ...read more.

However, I think that this makes the wife seem entertaining and intriguing. Chaucer gives the wife a number of techniques, which help her to win her arguments. However, he does not let her become too clever, as some of her arguments are convincing and others less so. The wife uses many techniques, such as fast-talking, reversing the argument, or even interpreting the bible to suit her own purpose. One point that I think that the wife makes convincing is when she uses human biology to support her argument. She argues that the theologians say that the reproductive organs were invented so that the bladder could be emptied and so that a male could be differentiated from a female. However, the wife knows that this cannot be the whole story, as the bible says that a husband must "pay his marriage debt" to his wife in bed. Therefore, s****l organs must have a pleasurable purpose too. However, I think that the wife uses this argument to justify her excessive s****l needs and that if the bible requires a "marriage debt" she will make sure that it is paid very often. One argument that I find less convincing is the wife's advice on how to handle husbands The Wife of bath is not ashamed to admit she exerted power and authority over her first three husbands She considers the first three as good men, who were wealthy but too old to satisfy the Wife's voracious s****l appetite. ...read more.

However, after reading her prologue my opinions have changed frequently. At times, I feel that the wife makes some convincing and logical arguments, such as using human biology to back up her point. At other times, I feel that her arguments are less convincing, and that she uses her arguments purely to try and justify her excessive indulgence of s****l desire. I find the prologue and tale of the Wife of Bath interesting in the fact that a medieval piece of literature with such a feministic message was written by a man in the misogynistic era that Chaucer lived in. Some feminist critics, such as Susan Crane and Catherine S. c*x, view her as destined to fail in her search for equality, partly because she is trying to gain 'acceptance by emulating men instead of embracing her femininity, but mainly because she is a fictional character, written by a man'. Similarly, Hanson reminds the audience " that the wife is a fictive creation of Chaucer, a man with little empathetic knowledge of women." Most critics agree that the Wife of Bath is Chaucer's most vivid and realistic creation, yet at the same time she is the character perhaps most thoroughly constructed from literary sources. I would agree with these viewpoints to some extent as I think that the wife is unable to see that her tactic simply reinforces all the stereotypical medieval ideas about women as cruel, emotional and s******y voracious. Chaucer is, therefore, seen as reinforcing anti-feminist views rather than undermining them. ...read more.