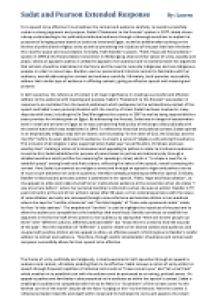 Analysis of speeches by Sadat and Bandler

﻿Sadat and Pearson Extended Response By: Lauren For a speech to be effective it must address the context and audience carefully, to overall successfully sustain a strong argument and purpose. Sadat?s?Statement to the Knesset? spoken in 1977 clearly shows a deep understanding to his politically intellectual audience through a thorough exordium to explain his purposes of bringing peace based on justice to Israel and Egypt, as well as additionally touching on the themes of political and religious unity as well as presenting the injustices of the past that have hindered this need for peace and reconciliation. Similarly, Faith Bandler?s speech, ?Faith, Hope and Reconciliation? spoken in 1999 at the Reconciliation Convention in Wollongong, shares similar values of unity, equality and peace, where an appeal to pathos is utilized to appeal to her audience and to overall present her argument that activism should be maintained in the future and the need to reconcile Indigenous and non-Indigenous peoples in order to revive hope. Bandler uses her personal and historical context to familiarize with her audience, overall addressing her context and audience carefully. Ultimately, both speeches successfully address their similar type of audience in differing contexts, giving an effective speech with meaning and purpose. In both speeches, the reference of context is of major significance in creating a successful and effective address to the audience with meaning and purpose. Sadat?s ?Statement to the Knesset? was spoken in response to an invitation from the Jewish parliament which juxtaposes to the extraordinary context of the speech and Sadat?s own personal situation with the country of Israel. ...read more.

An appeal to pathos and familiarity is also presented to his audience as within the speech?s context, Sadat is enabling his audience to sympathize with him as he feels it is ?incumbent? of him to have come ?to the farthest corner of the world? despite all the facts ?surging on him? by the Knesset. Here the context is reflected as Sadat risked life and death within Israel and his homeland to come and speak to the Israeli government about ?peace based upon justice?. Sadat also conveys the theme of unity within his address when he references ?Abraham ? great grandfather of the Arabs and Jews?. Abraham to the Arabs and Jews is seen as a patriarchal symbol in both countries, which represents the inclusiveness of each country, overall allowing Sadat to establish himself once again as a peaceful and political envoy to the Knesset through his clever use of pathos and unity among his audience within the specific context of the speech. Through this notion of unity within Sadat?s speech he is able to reiterate his purpose of coming to Israel and to justify his reasoning to speak to the Knesset, which overall was to establish ?peace based on justice? between the two countries. Similarly, Bandler presents a sense of unity among her audience through her acknowledgement of her diverse and multicultural audience that when she states that they ?may have different cultures, different political beliefs? but all share one view of supporting reconciliation. ...read more.

For example, Bandler juxtaposes reconciliation activists as ?decent people? who have ?lived, breathed, struggled and climbed? to those who do not support the need to reconcile and who ?close their eyes to the past?ignorance and blind?? and through this fluctuation in positive and negative diction between the two groups, the injustices of the past and present is shown. The theme of reconciliation is also shown in the speech through Bandler?s use of dichotomy when she discusses the impact of the media and describes them as ?talk-back jockeys? ?who are deliberately blinkered? and are ?chained in their stubbornness? due to their views against peace and reconciliation today. This metaphor of horses shows the bias and one-sided nature some people have against the need to reconcile and through the animalistic imagery she uses, her argument is strengthened. Overall, Bandler urges her audience for the need to revive hope and to find a common ground to overcome differences, and through an appeal to pathos by the end of her address she challenges her audience of this by stating ?If not now, when? If not us, who??. This employment of rhetorical questions and hyperphora such as ?What is reconciliation about? It is about promoting discussion? used at the end of her address emphasizes her argument and includes her audience intending that the modern generations are responsible for reconciliation for today and in the future. Through this challenge to her audience, the textual integrity of the speech is shown as the themes of peace; reconciliation and unity are still relevant today despite the context bound nature of the topic and time. ...read more.