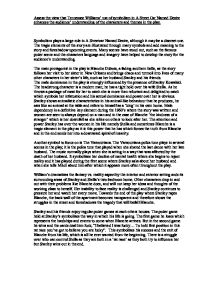 Assess the view that Tennessee Williams use of symbolism in &quot;A Street Car Named Desire&quot; enhances the audiences understanding of the characters and themes in the play.

Assess the view that Tennessee Williams' use of symbolism in A Street Car Named Desire enhances the audience' understanding of the characters and themes in the play. Symbolism plays a large role in A Streetcar Named Desire, although it may be a discreet one. The tragic elements of the story are illustrated through many symbols and add meaning to the story and foreshadow upcoming events. Many scenes have stood out, such as the famous poker scene and the characters language and imagery have helped to develop the story for the audience's understanding. The main protagonist in the play is Blanche Dubois, a fading southern belle, as the story follows her visit to her sister in New Orleans and brings chaos and turmoil into lives of many other characters in her sister's life, such as her husband Stanley and his friends. The male dominance in the play is strongly influenced by the presence of Stanley Kowalski. The headstrong character is a modern man; he has a tight hold over his wife Stella. As he throws a package of meat for her to catch she is more then reluctant and delighted to catch which symbols her infatuation and his s****l dominance and power over her is obvious. ...read more.

The poker game held at Stanley's symbolizes the way in which his life is going. The first game he loses which represents the hardships and events to come when Blanche arrives. But in the second game he wins and the cards deal him luck, "I believed I was lucky... To hold first position in this rat race you've got to believe you are lucky". This symbolizes his success and the exit of Blanche from his life, which is all he ever wanted from the beginning. There is a struggle over who can control Stella as they are both in a 'rat race' as they both try to influence her but Stanley wins out in the end. The poker game is recognised as a game of bluff. Blanche is considered to be playing a game of bluff throughout the play as she's portrayed as a compulsive liar. The beginning of Blanche losing as she can no longer lie to save her life as this happens when she lies to Mitch continuously; "I don't think I want to marry you any more... You aren't clean enough". Again, Blanche's fantasy world comes into play and acts as a form of escapism to Blanche, possibly from her past. Hiding from her past is what Blanche has hoped to do when she moves to New Orleans in the hope of a new start, but the audience see her unable to do this. ...read more.

Stanley's drinking is social: he drinks with his friends at the bar, at poker games, and to celebrate the birth of his child. Blanche's drinking, on the other hand, is seen as anti-social, and she tries to keep it a secret. She drinks on the sly in order to withdraw from harsh reality as alcohol can lead to stupid behaviour and Stanley, who is quick witted and smart realizes there's more to her then meets the eye. A state of drunken stupor enables her to take a flight of imagination, such as concocting a getaway with Shep Huntleigh. For both characters, drinking leads to destructive behaviour: Stanley commits domestic violence, and Blanche deludes herself. Yet Stanley is able to rebound from his drunken escapades, whereas alcohol augments Blanche's gradual departure from sanity. The importance of symbolism throughout the play is significantly shown in the language and imagery shown throughout the text. It develops the play and its use of language has many hidden messages and s****l innuendos written behind it. The play follows many themes such as madness, fantasy and violence which would not be clearly illustrated if it were not for the use of symbols like the polka music and the paper lantern. The ending of the play was the result of Blanche's strange behaviour due to the many symbols that were highlighted throughout and have made the story and its plotline far more interesting once fully analyzed and understood. ...read more.