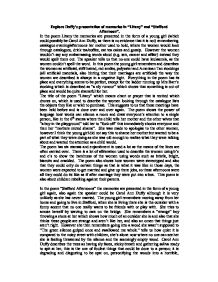 Explore Duffy's presentation of memories in "Litany" and "Stafford Afternoon". In the poem Litany the memories are presented in the form of a young girl (which could possibly be Carol Ann Duffy, as there is no evidence that it is not) remembering catalogue evening/afternoons her mother used to hold, where the women would look through catalogues, drink tea/coffee, eat tea cakes and gossip. However the women wouldn't say any embarrassing words aloud (e.g. s*x, cancer and affair) instead they would spell them out. The speaker tells us that no-one could have leukaemia, as the women couldn't spell the word. In this poem the young girl remembers and describes the women as artificial, stiff-haired, red smiles, polyester and American Tan stockings (all artificial materials, also hinting that their marriages are artificial) the way the women are described is always in a negative light. Everything in the poem has its place and everything seems to be perfect, except for the ladder running up Mrs Barr's stocking which is described as "a sly rumour" which shows that something is out of place and would be quite shameful for her. The title of the poem "Litany" which means chant or prayer that is recited which drones on, which is used to describe the women looking through the catalogue lists the objects they like or wish to purchase. ...read more.

She remembers a "strange" boy throwing a stone at her which shows how much of an outsider she is and also that she thinks these people are strange and aren't like her, and also an omen that things just aren't right. However she then remembers going into a wood she wasn't supposed to "The green silence gulped once and swallowed me whole." tells us how quiet it is compared to the noisy street with children, she's alone now where no one can see her she is feeling threatened by the silence and the seemingly empty wood. Carol Ann Duffy describes the trees as having sly faces, sticky breath and gathering saliva ready to spit at her, this is the one of foulest things that could be done to a person; it is degrading and disgusting to be spat on, personifying the woods into a horrible, frightening person. All this is like an omen, like she is preparing us for the horrible things to come; it's a different way to describe nature as it is usually peaceful and unthreatening. Then Carol Ann Duffy gives us the two words "Too late" immediately we now something awful is about to happen and then "touch" She meets a man stood exposing himself asking her to m********e him , Carol Ann Duffy describes the man's p***s as a living purple root again using nature as a threatening and frightening thing. ...read more.

Both poems deal with memories of young children, children's innocence, people changing and children rebelling. In both poems both children are outsiders in a way as in the first the child isn't in the conversation with the adults and in the second the child isn't involved with any of the other children, also both poems show realisation of the fact they have done something wrong, also at the beginning of each poem time and life seems to be dragging on and then speeds up suddenly towards the ends of the poems. Also the theme of things not being just right is in both of the poems the women's stockings in the first and the sudden silence and harshness of the woods in the second, also the silence of the wood an the silence of the mother both show how frightening that type of atmosphere can be. The wood in the second poem reminds me of the women in the first poem both being sly and artificial. In conclusion both poems present memories in the form of speakers in these cases young girls telling us about a certain memory, both these poems are in the section entitled "Mean Time" by Carol Ann Duffy this suggest and is shown in both poems that time is harsh and is always waiting for us, it slow downs speeds up or just stop completely. ...read more.